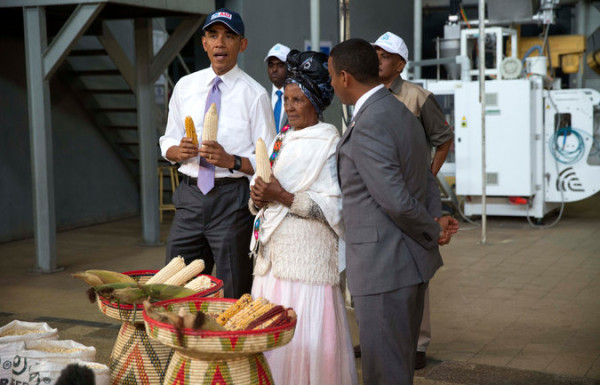 President Obama toured the Faffa Foods factory in Addis Ababa, Ethiopia, on Tuesday. During his visit to Africa, Mr. Obama has essentially made the argument that Washington offers a better, more empowering vision for the continent’s future than China does. Credit Doug Mills/The New York Times

ADDIS ABABA, Ethiopia — Without ever quite saying so explicitly, President Obama used his four-day trip to Africa to suggest that the United States offers an alternative to China’s aggressive courtship of the continent.

At a time when China has surpassed the United States as a trading partner and left its mark throughout Africa, Mr. Obama essentially made the argument that Washington offers a better, more empowering vision for Africa’s future.

Whether he has succeeded in this mission remains to be seen. But at all of his stops, he laid out the case that Africa should be wary of China’s appetite for oil for its own use and instead embrace an American relationship that seeks to foster economic growth, democracy, health care, education and electrification.

“The United States isn’t the only country that sees your growth as an opportunity, and that is a good thing,” Mr. Obama told African leaders in a speech here in Addis Ababa, the Ethiopian capital, before returning to Washington. He urged Africans to do business with everyone.

“But economic relationships can’t simply be about building countries’ infrastructure with foreign labor or extracting Africa’s natural resources,” he said. “Real economic partnerships have to be a good deal for Africa. They have to create jobs and capacity for Africans.”

“That,” he added, “is the kind of partnership America offers.”

But the depth of the challenge was all around Mr. Obama. He was delivering that message at the gleaming headquarters of the African Union, built with Chinese money. Outside the building, a jumbo screen bore the name of Xinhua, the Chinese state news agency. Throughout Africa are highways, railroads and airports that have been or will be upgraded by China.

Indeed, China’s news media mocked Mr. Obama’s visit, casting it as a weak effort in a contest he was losing.

“Obama’s high-profile visit has one more purpose, which is offsetting China’s growing influence in this continent and recovering past U.S. leverage,” said a column in Global Times, an English-language Chinese newspaper. “His diplomatic rhetoric,” it added, “can’t conceal the notion that the U.S. is nervous about its rise, taking China as a rival in Africa.” 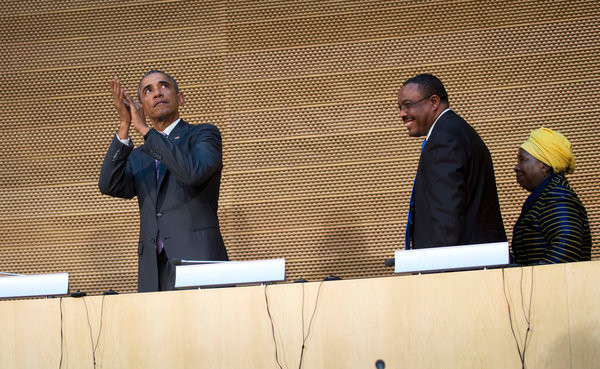 President Obama addressed the African Union on Tuesday in Ethiopia. He called for engagement with the United States over China at a gleaming headquarters built with Chinese money. Credit Doug Mills/The New York Times

China, by contrast, doubled its trade with Africa over just four years, to $222 billion last year.

By 2013, Africa had become China’s second-largest source of crude oil imports, shipping 1.3 million barrels a day, or 23 percent of what Beijing was buying abroad, according to a report by the Council on Foreign Relations. China’s largest suppliers of crude include Angola, Equatorial Guinea, Nigeria, the Republic of Congo and Sudan, all countries with troubled histories in terms of governing democratically.

China provides low-interest loans to countries with poor credit ratings in exchange for oil and mining rights. Last year, China unveiled a $12 billion package of credit and development funding for Africa. China expects to provide $1 trillion in financing to Africa by 2025, much of it for roads, bridges and other critical structures.

Tedros Adhanom Ghebreyesus, the Ethiopian foreign minister, said his country had strong relations with the United States but wanted more economic ties. “One area that lags behind is trade and investment,” he said. “In terms of trade and investment, considering the very long historic ties that we have, it’s really not as one would expect, and the main focus during our bilateral discussion was that.”

Last year, Mr. Obama hosted dozens of African leaders for a summit meeting in Washington, and this was his fourth trip to sub-Saharan Africa as president. Before his trip, he signed an extension of the African Growth and Opportunity Act, a trade preference program, and he brought with him various announcements of increased investments or aid.

At a conference for entrepreneurs, he announced more than $1 billion in financing for start-up businesses in Africa raised from banks and philanthropists, and he said his administration would host another forum next year “to mobilize billions of dollars in new trade and investment.”

While most American trade in the region is with Angola, Nigeria and South Africa, he said he was increasing trade missions to places like Ethiopia, Mozambique and Tanzania.

Here in Addis Ababa, he visited a food production factory financed with American help, inspected the first in a series of new Boeing Dreamliners bought by Ethiopia and announced more plane purchases. He brought with him business executives like Steve Case, a founder of AOL. And Mr. Obama promised that his two-year-old Power Africa program to bring electricity to remote corners of the continent was building momentum despite its struggles.

“China has over the last several years, because of the surplus that they’ve accumulated in global trade and the fact that they’re not accountable to their constituencies, have been able to funnel an awful lot of money into Africa, basically in exchange for raw materials that are being extracted from Africa,” Mr. Obama told the BBC in an interview before his trip.

He said he considered Chinese trade “a good thing” but added that what he wanted “to make sure, though, is that trade is benefiting the ordinary Kenyan and the ordinary Ethiopian and the ordinary Guinean and not just a few elites and the Chinese, who then get the resources that they need.”

That competition with China seemed to influence how Mr. Obama handled the difficult issues of human rights and democracy. In his speech at the African Union, he called on long-entrenched leaders to step down in favor of fresh blood. But given the chance to press the leaders of Kenya and Ethiopia directly during meetings to do more to expand democracy in their countries, he chose a less confrontational tone.

Aides described that as a more “constructive” approach that would not alienate potential friends and would ultimately prove more effective. While human rights groups had urged Mr. Obama not to visit places with checkered human rights records, like Ethiopia, the president’s advisers said that would simply push them into China’s camp.