Paul Lewis in Washington, Oliver Laughhland in New York and Roger Hamilton-Martin in London, Thursday 30 July 2015, The Guardian (US)

The United Nations has spent half a billion dollars on contracts with a Russian aviation company since discovering one of its helicopter crews in the Democratic Republic of the Congo drugged and raped a teenage girl in a sexual attack. 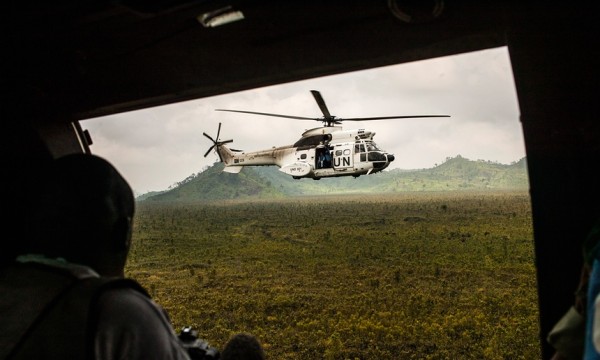 Senior UN officials considered terminating the company UTair’s contract after concluding that the incident, in which the girl was dumped naked and unconscious inside the helicopter base, was indicative of a wider culture of sexual exploitation at the company.

Internal UN documents, marked “strictly confidential” and leaked to the Guardian, reveal how the UN’s internal complaints unit uncovered evidence the woman was abused with lit cigarettes and photographed lying on the ground. The UN concluded the shocking attack in 2010 was perpetrated by the manager in charge of UTair’s base in Kalemie, eastern DRC.

The main investigative report, from March 2011, warned of a possible “culture of sexual exploitation and abuse” at UTair. Copies of that report were circulated among top officials at the UN, including, in New York, the office of the secretary general, Ban Ki-moon.

After what is described as collective “disgust” in the top echelons of the UN over the case, officials considered terminating UTair’s contract. Instead, the company was permitted to continue doing business with the UN on the condition it introduce a new training regime overseen by a monitor. UTair remains the largest provider of air transportation to the UN.

The disclosures come at a critical moment for the UN secretary general, who has struggled to contain the fallout from recent revelations concerning the sexual abuse of children by French and other peacekeeping troops in the neighbouring Central African Republic.

Last month Ban, who argues the UN has a “zero-tolerance” policy toward sexual exploitation, ordered an independent review of the case involving French peacekeepers and wider problems with dealing with sexual abuse, an issue that has plagued the UN for decades. He will now be forced to explain how a company implicated in sexual exploitation managed to expand its contracts with the UN.

“It wasn’t just one or two bad apples,” said a senior UN official familiar with the report and its fallout. “It was clear the problems of sexual exploitation were wider.” Since the damning report into UTair was completed four years ago, the company has been granted new contracts, or renewed existing deals, for helicopter support at UN missions in Lebanon, Western Sahara, the Democratic Republic of the Congo, Sierra Leone, Sudan, Ivory Coast, Liberia, Afghanistan, South Sudan, Somalia and Mali. 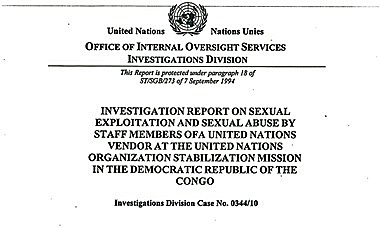 Cover of report in to sexual abuse by UTair employees at a UN base called Kalemie in Democratic Republic of Congo. Photograph: OIOS

In total, the company, which is referred to in some documents as Nefteyugansk, a subsidiary operating in the DRC, has been granted contracts worth $543.3m for services provided in 11 countries since the UN became aware it had a problem with sexual exploitation.

The UN was notified of disturbing reports about UTair’s compound in Kalemie in August 2010. A local NGO relayed a complaint from the teenage girl who said she had been sexually assaulted by “pilots” who worked for the UN’s mission in the country, Monusco.

The complaint was passed on to the UN’s Office of Internal Oversight Service – an internal investigations unit, commonly known as OIOS – which dispatched a senior investigator to the country. The final investigation report, signed off by the then officer-in-charge of OIOS investigations, Michael Dudley, is accompanied by dozens of medical reports and witness interviews. They reveal how UN investigators focused on two UTair employees: the site manager at the compound and a ground engineer.

However, the report paints a picture of routine sexual encounters between local women and staff at the base, and does not rule out complicity of other helicopter crew at the base. The victim told UN investigators that she had been walking to see a friend when a man she assumed to be a security guard at the compound invited her in to meet with the site manager.

She said she was escorted to the site manager’s room, where she was offered a fizzy drink. She then became drowsy, she told investigators, and drifted out of consciousness, as a second man entered the room.

The UN report found she did not regain full consciousness until around four hours later, at about 6pm. The girl recalled waking up naked, being taken into a bathroom, having water poured over her and later complaining “her private parts were sore”. She recalled being escorted from the compound by a guard who helped her get dressed. The man who escorted the girl to the site manager’s room, a cleaner, testified that he had been instructed by the UTair site manager to “find a girl he could have a ‘good time’ with”.

A security guard who worked at a church organisation neighbouring the compound, told UN investigators that he also saw the teenage girl lying naked and unconscious in the site manager’s garden that day. He testified that the UTair ground engineer implicated in the case “took pictures of her and threw cigarettes on her”. 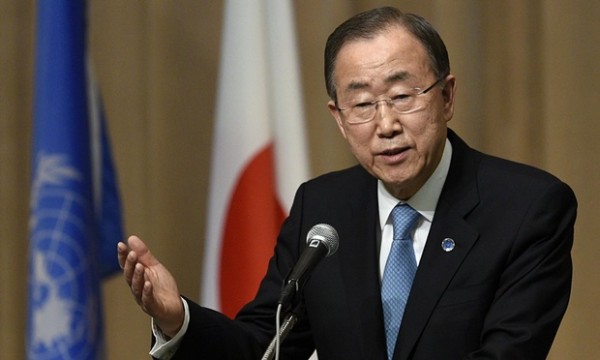 Copies of the main investigative report were circulated among top officials at the UN, including, the office of the secretary general, Ban Ki-moon. Photograph: Franck Robichon/EPA

The report continues: “He [the guard] further said that [the ground engineer] put a lit cigarette in her anus. He also said that [the ground engineer] was very drunk and beat [the victim] severely, including kicking her in the buttocks”. The UN report did not use the term “rape”. However, in the US the sexual assault it describes being perpetrated on the victim would constitute rape under the definition adopted by the FBI since 2013.

The UN report notes that when the lead investigator interviewed the ground engineer, weeks later, he smelt strongly of alcohol and had bloodshot eyes. He denied any knowledge of the incident involving the teenager and told the investigator he had never seen any women inside the compound. UTair’s site manager, the chief suspect, was never interviewed; the report notes only that he was “invited” for an interview three times and failed to show up.

The OIOS is an administrative investigative office whose authority is limited to certain parts of the UN system. A UN spokesperson told the Guardian the OIOS “has no coercive authority over people who are not UN staff”.

The UN’s investigator did, however, interview several other UTair crew members, including three engineers, three pilots and two flight attendants. They all gave similar evidence about never having seen women at the base, a claim the OIOS concluded was “inconsistent with the balance of evidence”.

Although UTair’s site manager refused to be interviewed, he was confronted, two days after the rape was said to have occurred, by a local UN official. Félix Kitungwa, who was then the UN’s acting officer in charge of child protection in the area, told the OIOS that he accompanied the rape victim to the Russian helicopter base to help retrieve her mobile phone.

When they encountered the UTair site manager, he admitted to Kitungwa that the teenager had been at his house, but denied she had been raped. The site manager then tried to give the victim $500. The report concluded the site manager “either sexually abused or facilitated the sexual abuse of a minor”. The ground engineer, the report said, “physically assaulted and engaged in activities denigrating a minor”.

The report also concluded that UTair had not given its staff mandatory training designed to prevent sexual abuse and exploitation at UN peacekeeping missions. In the wake of the UN’s findings, UTair dismissed the site manager and ground engineer implicated in the report. Both have been blacklisted from future work with the UN.

Around the time of their dismissal, the news agency Reuters reported that two contracted UN helicopter operators in the DRC had been sacked over an unknown incident. Until now, however, the UN and UTair have succeeded in keeping secret details of the rape and the company’s wider perceived problems.

Unlike UN staff and peacekeeping troops, contracted UN workers are not afforded diplomatic immunity from prosecution. According to a second UN source with close knowledge of the investigation, the lead investigator in the case recommended, in an early draft of the report, that the UN’s findings be shared with local law enforcement authorities.

However, that recommendation appears to have been struck from the final draft. The UN told the Guardian it was unable to confirm or deny whether a recommendation to pass evidence to local law enforcement authorities was removed from early drafts of the report. Prosecutors in the DRC were already aware of the case, the UN said in a statement. Once its investigation was completed, the report was shared with authorities in Russia, the UN added.

The first UN source said: “OIOS looked at other things involving the company … It is clear the problems of sexual exploitation were wider than just two individuals. We believed there was a need to change the culture of the organisation.”

In the end, the final OIOS report on the attack contained only a single recommendation: for the findings to be shared with divisions within the UN that deal with procurement of services and for them to consider “appropriate action against” UTair.

Around May 2011, the UN suspended both UTair and its subsidiary and convened what it now describes as an “ad hoc high level panel comprised of senior UN officials” to advise the appropriate repercussions for the Russian helicopter provider.

In its statement to the Guardian, the UN confirmed the panel considered terminating UTair’s contract. But after taking into account “the mission criticality” of its helicopter services top UN officials ultimately decided to keep working with the company on the condition it submitted to a “compliance monitor”.

According to the UN, the monitor, an international law firm, was mandated to oversee the implementation of sexual abuse and exploitation “prevention training and outreach programmes” at the company. The agreement came into force in October 2011, kickstarting a four-year period of expansion during which UTair has significantly bolstered its business with the UN across the world.

Asked for a comment, a representative of UTair pointed the Guardian to a statement published on its website four years ago. It said the company “actively participated” in the UN’s investigation and “took the necessary disciplinary measures” against one employee. The process of “constant monitoring” introduced by the UN, the UTair statement added, would help the company meet the high standards expected of UN contractors.

The UN, in its statement, said the novel auditing procedures it imposed on the Russian helicopter operator were intended to achieve “rehabilitation, as contrasted with contract termination”.

“It is a long-term external and independent oversight mechanism for a UN vendor, implemented through contractual rather than judicial terms,” the UN said. “It is the first agreement of its kind adopted by the UN.”