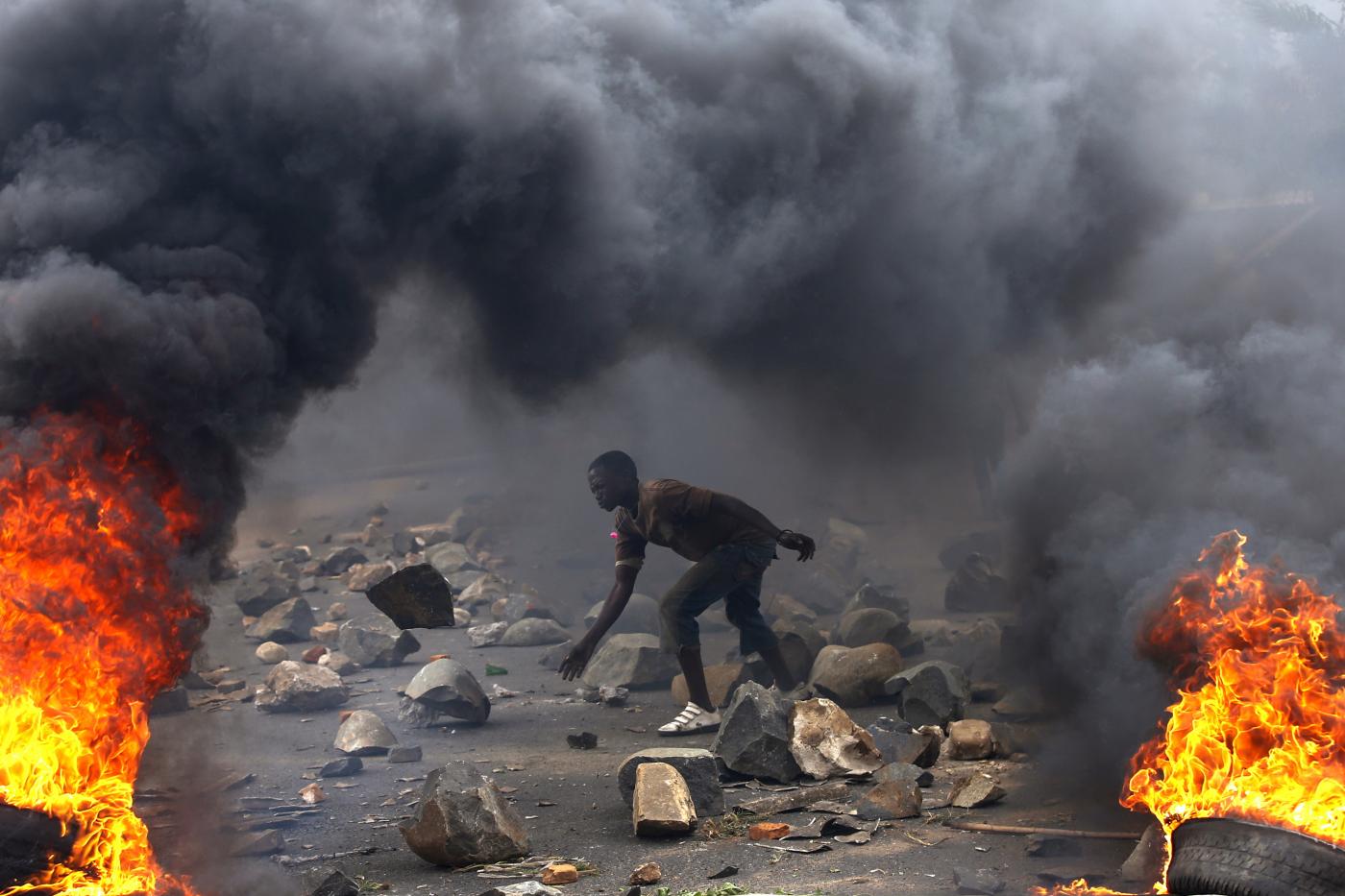 A protester sets up a barricade during a protest against Burundi President Pierre Nkurunziza and his bid for a third term in Bujumbura, Burundi, May 22, 2015.

After rebel forces in Burundi coordinated a round of attacks on military facilities in Bujumbura on December 11, the government began rounding up suspected militants the following day and killing them execution-style on the streets. Dozens died, many of them civilians. The African Union’s Peace and Security Council held an emergency meeting several days later and emerged with an ultimatum for Burundian President Pierre Nkurunziza: accept a 5,000-strong peacekeeping force or face more sanctions or even a forcible military intervention. He had 96 hours to decide.

The African Union was one of the guarantors of the 2000 Arusha Accords, a peace agreement that helped settle the country’s decades-long civil war. As such, the union faced a legal, political, and moral responsibility to intervene in Burundi after Nkurunziza decided to run for a third term as president, a move that dramatically raised the risk of returning the country to armed conflict. When Nkurunziza announced his candidacy in late April, breaching the two-term limit set forth by the accords, the country erupted in protest; demonstrators died in clashes with authorities and a rebel group attempted to overthrow Nkurunziza in May. But the violence in December surpassed those events, by far.

The African Union’s ultimatum, issued through a communiqué from its Peace and Security Council on December 17, comes after many previous attempts to resolve Burundi’s political crisis. The union’s earlier attempts failed, however, even though it has used nearly its full arsenal of conflict resolution tools. Even before the violence first erupted, the union had flagged Burundi and monitored it through its early warning system. Before the 2015 election, the African Union Commission spent a year trying to persuade Nkurunziza not to stand for a third term. This included dispatching a high-level mission on March 27, led by Commission Chairperson Nkosazana Dlamini-Zuma, and engaging its Panel of the Wise, a group of eminent African elders, in its preventive efforts. 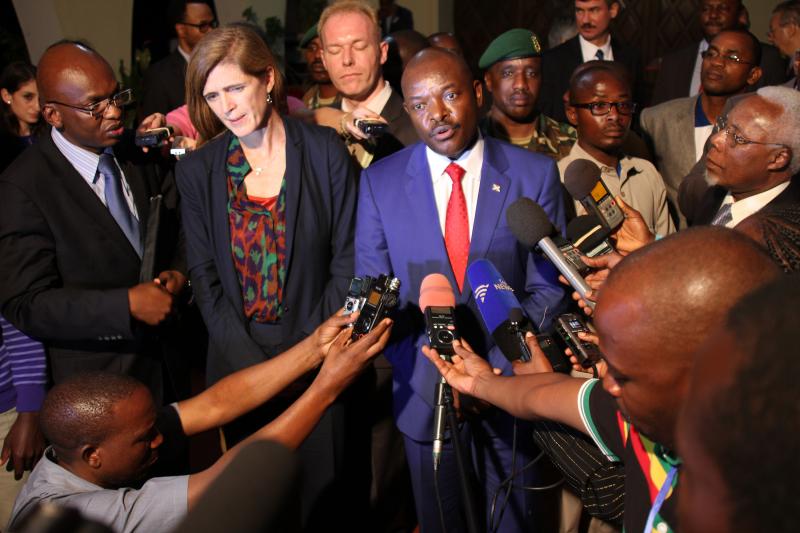 After the attempted coup in May, the African Union’s Peace and Security Council authorized the Eastern Africa Standby Force (one of the five regional forces that make up the African Standby Force) to begin contingency planning for a peace support operation, in case this became necessary. The union also authorized the deployment of up to 100 human rights monitors and military observers to report on violence and human rights violations, particularly in Bujumbura. To date, only ten of these observers have been deployed, because Burundi has insisted that they work in tandem with Burundian officials to produce a joint report. In October, the African Union facilitated a mediation process that would involve an inter-Burundian dialogue between the government, civil society representatives, and opposition movements, which was led by Ugandan President Yoweri Museveni. Around the same time, the union authorized sanctions against key Burundian leaders “whose actions and statements contribute to the perpetuation of violence and impede the search for a solution,” as it wrote in a statement, and began compiling a list of those who had perpetrated violence with an eye toward future prosecution. Finally, on December 7, just before the December 11–12 crisis, the African Union sent a fact-finding mission composed of members of the African Commission on Human and Peoples’ Rights to Bujumbura. The preliminary findings revealed a serious potential for escalation and the perpetration of crimes that would fit the definition of “grave circumstances” set out in the AU’s Constitutive Act. Under article 4(h), the AU has the right to intervene militarily under such circumstances, which include war crimes, genocide, and crimes against humanity.

So far, the December ultimatum has produced mixed results. One upside is that the violence has died down and the number of reported fatalities has dropped. But it is too early to say whether this is a direct result of the communiqué or a change in local dynamics. The threat of sanctions and intervention also put pressure on the Burundi government to return to the previously stalled mediation process, which collapsed because of irreconcilable differences between the government and opposition groups. The inter-Burundian dialogue relaunched in Uganda on December 28 and then promptly moved to Tanzania, where the mediators once again struggled to overcome intransigent positions adopted by some of the participants.

On the flip side, the communiqué exposed the weaknesses of its Peace and Security Council. For starters, it revealed some of the organization’s initial divisions. On December 20, it was reported that Tanzania, one of the current Peace and Security Council members, broke ranks by disputing the need for peacekeeping troops in current circumstances. Tanzania’s minister of foreign affairs, Augustine Mahiga, reportedly reiterated this position a few days later, arguing that his country preferred a political settlement over the deployment of troops, which he believed would escalate the current crisis. The Peace and Security Council makes its decisions by consensus, so member countries generally agree not to criticize decisions in public. Eventually, however, Mahiga announced his support for African Union peacekeepers in Burundi on January 8.

As for Nkurunziza, he rejected the union’s proposal to deploy a peacekeeping force. He declared that military intervention by African Union troops would represent “an attack on the country and every Burundian will stand up and fight against them.” On December 21, Burundi’s parliament unanimously rejected the union’s proposal to intervene. To complicate matters, Burundi has over 5,000 of its soldiers fighting for the African Union Mission in Somalia, which makes up nearly one-quarter of the body’s peacekeeping force there. 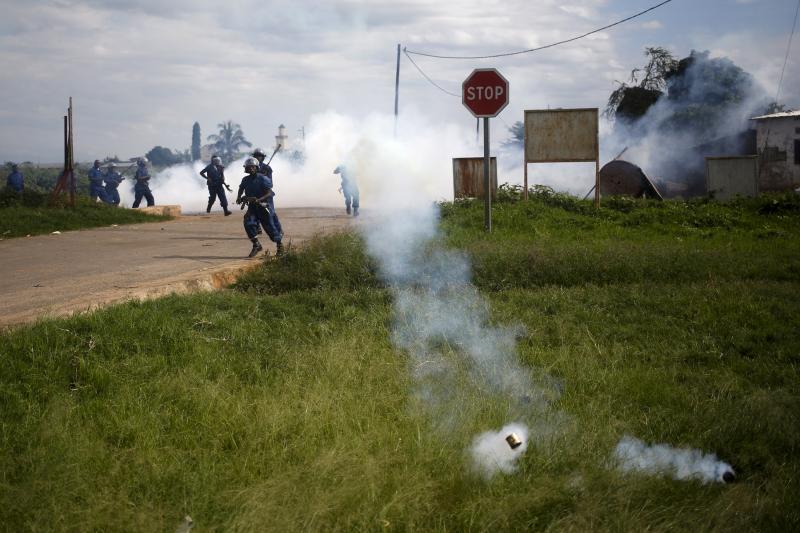 Police fire guns and teargas during a demonstration in Bujumbura, Burundi, May 12, 2015.

Since the Burundian government has refused to consent to an intervention, the Peace and Security Council will now need to follow through on its ultimatum. But it faces several problems. First, although sanctions can have important political, economic, and symbolic effects, they are slow to change dynamics on the ground ,if they change them at all. So far, the suspension of various international assistance programs, including from the United States and European Union, has contributed to a rapidly worsening economic situation in Burundi. A peace support operation or military intervention, on other hand, could protect civilians and monitor the threats posed by armed groups, but without the consent of Burundi’s government, the intervention might prove counterproductive in the long run. After all, on December 23, Burundi’s foreign minister wrote a letter to the chairperson of the commission, in which he accused Rwanda of stoking rebellion in Burundi, a view corroborated by some international nongovernmental organizations. On the same day a new rebel organization, Republican Forces of Burundi, made up of former military and police officers, announced it was organizing to protect the population, uphold the Arusha Accords, and oust Nkurunziza. In this sense, the December 17 communiqué has also added to existing tensions. But at this point, if the union backs down, it will reduce the credibility of its coercive tools in responding to future conflicts.

This is where the African Union faces a real test of its peace and security institutions. While the Peace and Security Council can authorize diplomatic and economic sanctions, and launch a peace support operation with the consent of the host country’s government, it cannot deploy a military intervention under article 4(h) of the Constitutive Act. Such a decision requires at least two-thirds approval by the members of the African Union Assembly, which is comprised of the heads of all its member states—including Nkurunziza. Timing is another issue. The assembly usually convenes only twice a year, in January and June, which makes it far from ideal for speedy conflict management.

There is still a thread of hope. The 26th African Union summit is currently underway in Addis Ababa and on January 29, the Peace and Security Council will hold a high-level meeting to discuss a report on the Burundi crisis released by the chairperson of the AU Commission. The assembly is scheduled to meet immediately afterward, on January 30–31. This last meeting in particular may put more pressure on the Burundian government to consent to the deployment of a peacekeeping force, or it could even authorize a forcible intervention under article 4(h). Perhaps the closest precedent for this situation is the peacekeeping mission in Sudan. In 2006, the government of Sudan initially refused to allow a UN peacekeeping operation on its territory, but subsequently permitted the deployment of a hybrid African Union–UN operation, UNAMID. In that case, it was diplomatic pressure, particularly from China, that changed the government’s mind. It is possible that the union’s member states could exert similar pressure on Burundi. In this vein, a UN Security Council delegation recently visited Burundi, urging it to accept African Union peacekeepers and has even made its own plans to deploy UN peacekeepers should the situation deteriorate.

Over the next few days, the African Union Assembly will make a decision on how to respond to the crisis. It is unclear whether it will succeed in persuading Burundi to accept African peacekeepers, and if not, whether it will authorize more diplomatic and economic sanctions or turn to an unprecedented forcible military intervention under article 4(h). One thing is certain: Burundi is hardly alone in having an incumbent president who wanted to extend his rule. So whatever the assembly decides, other African countries will be watching with considerable interest.