African leaders failed on Sunday to authorise a proposed peacekeeping force to stem violence in Burundi in the face of vehement opposition from the government in Bujumbura.

Instead, the African Union is to send envoys for more talks, although previous negotiations have done nothing to end months of conflict. The United Nations has warned that Burundi risks a repeat of the 1993-2006 civil war, with hundreds of people killed since April 2015, when President Pierre Nkurunziza announced he would stand for a controversial third term.

At least 230,000 people have fled to neighbouring countries.

Burundi has consistently opposed the idea of the AU’s planned 5,000-strong peacekeeping mission, saying the deployment of troops without its express permission would be tantamount to an “invasion force”. 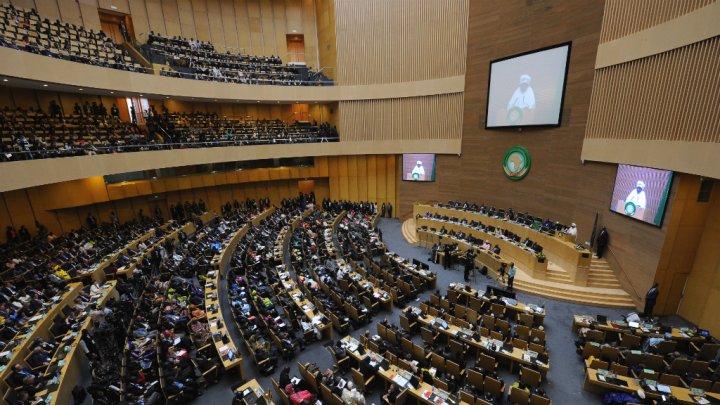 © TONY KARUMBA / AFP I UN Secretary General, Ban ki-Moon gives an address at the 26th presidential summit of the African Union on January 30, 2016 in Addis Ababa.

The AU charter’s Article 4(h) gives the pan-African bloc the right to intervene in a fellow nation state “in respect of grave circumstances, namely: war crimes, genocide and crimes against humanity”.

But top AU diplomat Ibrahima Fall said Sunday that sending troops without Burundi’s approval was “unimaginable,” with the bloc deciding to send envoys to hold talks with the government.

“There is no will neither to occupy nor to attack,” AU Peace and Security Council chief Smail Chergui added, saying that troops could be sent in the future “if Burundi accepts it”.

Clashes between government loyalists and the opposition have become increasingly violent.

“We want dialogue with the government, and the summit decided to dispatch a high level delegation,” Chergui told reporters, without giving more details.

Burundian Foreign Minster Alain Aime Nyamitwe told reporters he was “satisfied” at the decision and said Bujumbura was “open to cooperating with the international community, particularly the African Union.”

But he also questioned why AU envoys would want to take the time to travel to Bujumbura “since “everyone is aware of the position of Burundi” already.

‘We talk too much’

Chad’s President Idriss Deby, speaking after he took over the post of African Union chairman on Saturday, warned colleagues against inaction.

“Our organisation acts as it has for the past 20 or 30 years: we meet often, we talk too much, we always write a lot, but we don’t do enough, and sometimes nothing all,” Deby said.

Analysts say other African nations are wary of setting a precedent of deploying troops against the government’s wishes.

“It was never the intention of the African Union to deploy a mission to Burundi without the consent of Burundian authorities,” Ibrahima Fall, AU Special Representative for the Great Lakes Region, told French radio RFI.

“This is unimaginable,” the Senegalese diplomat added.

Leaders ‘must be held responsible’

Nkurunziza’s quest to remain in power sparked weeks of street protests that were brutally suppressed, and a failed coup.

The political rhetoric has also become more ethnically-charged, sparking fears the ruling party may be trying to drive a wedge between majority Hutus and minority Tutsis.

UN Secretary-General Ban Ki-moon, speaking on Saturday as the summit opened, made clear that troops were needed to stem the violence.

“Leaders who stand by while civilians are slaughtered in their name must be held responsible,” Ban said, insisting that the Burundi crisis required the “most serious and urgent commitment”.

He said the UN backed the AU’s proposal “to deploy human rights observers and to establish a prevention and protection mission”.
Rwanda hosts the next AU summit, slated for July.

Relations between Rwanda and neighbouring Burundi are tense, with Bujumbura accusing Kigali of backing opponents of Nkurunziza, claims Rwanda denies.