What African Americans lost by aligning with the Democratic Party 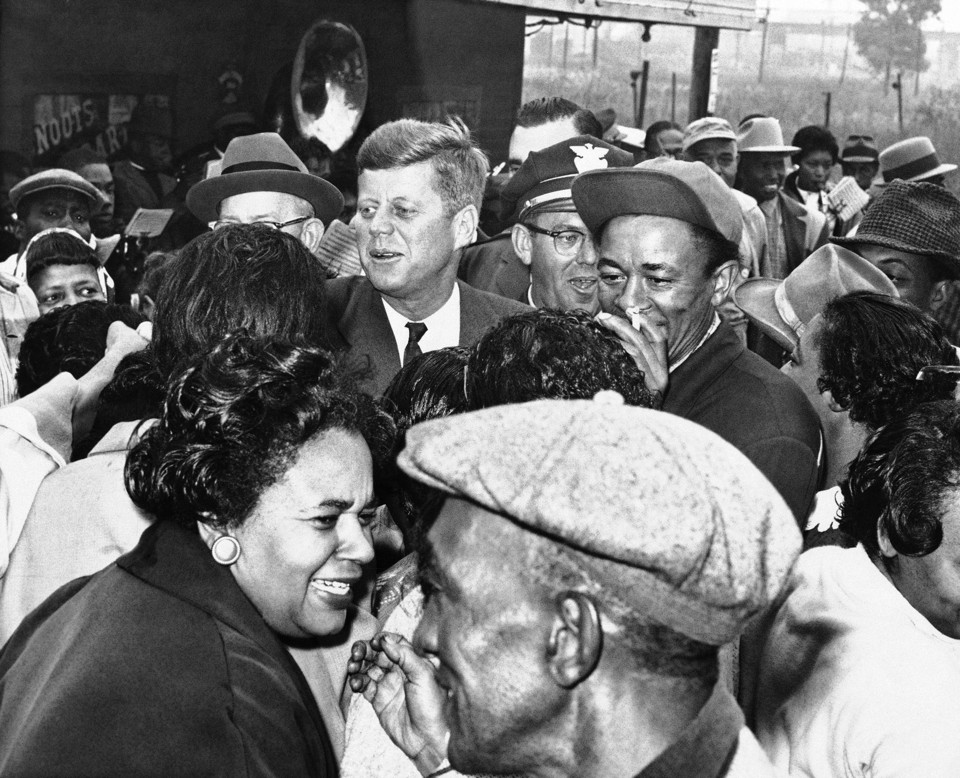 Sen. John F. Kennedy greets residents of the all African American community of Brooklyn, a suburb of East St. Louis, during campaign tour of Southern Illinois, Oct. 3, 1960 in St. Louis, Ill. The democratic presidential nominee and not scheduled a stop there but when he noticed a crowd had turned out with a brass band, he stopped anyway and greeted many of them personally. (AP Photo/Bob Scott)

Days before the 1960 election, Coretta Scott King received a call from then-candidate John F. Kennedy while her husband was in a Georgia jail, charged with trespassing after leading a sit-in demonstration against segregation in Atlanta. “This must be pretty hard on you, and I want to let you both know that I’m thinking about you and will do all I can to help,” Kennedy told her. The Democratic nominee’s brother and campaign manager, Robert Kennedy, called a DeKalb County Judge and successfully lobbied for Martin Luther King Jr.’s release.

The personal call and the timely intervention significantly bolstered Kennedy’s standing among black voters. They also strengthened the political alliance between the Democratic Party and African Americans. After his release, King praised Kennedy for exhibiting “moral courage of a high order.” His father, the influential Baptist pastor Martin Luther King Sr., said, “Kennedy can be my president, Catholic or whatever he is. I’ve got all my votes and I’ve got a suitcase and I’m going to take them up there and dump them in his lap.” Kennedy earned 68 percent of the black vote, which was the decisive factor in key states like Illinois, Michigan, and South Carolina.

Once in the White House, Kennedy faced pressure from civil-rights activists to make good on what King called a “huge promissory note” to pass meaningful civil-rights legislation. When President Lyndon B. Johnson signed the Civil Rights Act of 1964 and the Voting Rights Act of 1965, he cemented a political alliance between African Americans and the Democratic Party that continues to this day. But celebrating these landmark pieces of legislation makes it easy to overlook what black people in the United States lost when civil rights and equality for blacks were hitched to the Democratic Party.

While the passage of the Civil Rights Act helped Johnson earn support from 94 percent of black voters in 1964, there is a gulf between what black Americans hoped the legislation would achieve and what Democratic politicians actually delivered. Although the Civil Rights Act of 1964 helped end apartheid conditions in the South, a critical objective for which grassroots black Southern activists fought and died, the legislation did little to address the structures of racism that shaped black lives in cities like Chicago, Los Angeles, and Philadelphia. This was an intentional consequence of how the bill’s sponsors, largely liberals from the North, Midwest, and West, crafted the legislation.

As King understood, Democratic politicians acted more boldly on race issues in Alabama and Mississippi than in New York and Massachusetts. “There is a pressing need for a liberalism in the North which is truly liberal, a liberalism that firmly believes in integration in its own community as well as in the Deep South,” King told the New York Urban League in September 1960. As the Urban League’s executive director Whitney Young put it a few years later, “liberalism seems to be related to the distance people are from the problem.”

After the 1964 election, where Republican candidate Barry Goldwater described the Civil Rights Act as unconstitutional, black voters essentially found themselves in a one-party system for presidential elections. Republicans turned their attention to white voters in the South and suburbs and have made few serious attempts in subsequent campaigns to appeal to the African American electorate. Richard Nixon in 1960 is the last Republican candidate to earn more than 15 percent of black votes.

Democratic lawmakers drafted civil-rights legislation that would challenge Jim Crow laws in the South while leaving de facto segregation in the North intact. When NBC News asked the civil-rights organizer Bayard Rustin why many African American communities rioted the summer after the bill passed, he said, “People have to understand that although the civil-rights bill was good and something for which I worked arduously, there was nothing in it that had any effect whatsoever on the three major problems Negroes face in the North: housing, jobs, and integrated schools…the civil-rights bill, because of this failure, has caused an even deeper frustration in the North.” Today’s protest movements against second-class citizenship in Baltimore, Ferguson, Oakland, and elsewhere are in part a legacy of the unresolved failures of civil-rights legislation.

Unfortunately for black voters, most white politicians and voters assume that the civil-rights revolution not only leveled the playing field, but also tilted it in favor of African Americans. The white backlash to civil rights helped resurrect the Republican Party after the disastrous Goldwater campaign in 1964, and, over the last five decades, the Democratic Party has followed the electorate to the right.

This poses the biggest problem for black voters today, which is that Democrats running for state or national office aspire to win black votes without appearing to be beholden to black voters. This is especially true of the three Democratic presidents since Kennedy and Johnson. Black support was crucial to the elections of Jimmy Carter and Bill Clinton (each received over 80 percent of black votes), but both distanced themselves from policies that might seem to disproportionately help black people. Urban League Director Vernon Jordan outlined his concerns a year into Carter’s presidency: “We have no full employment policy. We have no welfare reform policy. We have no national health policy. We have no urban revitalization policy. We have no aggressive affirmative action policy. We have no solutions to the grinding problems of poverty and discrimination.”

When Bill Clinton and the “New Democrats” emerged victorious in the 1990s, thanks in large part to 83 percent support from black voters in 1992 and 84 percent in 1996, they adopted policies, such as welfare reform (Personal Responsibility and Work Opportunity Reconciliation Act of 1996) and a crime bill (Violent Crime Control and Law Enforcement Act of 1994) that proved ruinous for many black Americans. “It is difficult to overstate the damage that’s been done,” the legal scholar Michelle Alexander noted recently of Clinton’s presidency. “Generations have been lost to the prison system; countless families have been torn apart or rendered homeless; and a school-to-prison pipeline has been born that shuttles young people from their decrepit, underfunded schools to brand-new high-tech prisons.” Clinton acknowledged last year that the crime bill “cast too wide a net” and made the problem of mass incarceration worse.

More recently, as more groups—evangelicals, gays and lesbians, and gun owners, among them—lobby for specific policies, black voters have seen their interests deemed too “special” for consideration by a democratic administration. President Obama has felt the pressure to connect with black voters while distancing himself from black interests. Although his signature accomplishment, the Affordable Care Act, will surely benefit black Americans, he has been reluctant to endorse policies that cannot be pitched as universal. In a 2012 interview with Black Enterprise Magazine he said, “I want all Americans to have opportunity. I’m not the president of black America. I’m the president of the United States of America.”

In the 2016 Democratic primary, African Americans are challenging Hillary Clinton and Bernie Sanders to earn their votes. Whoever wins the nomination will likely garner support from over 85 percent of black voters, but African Americans still lack a mechanism to hold Democrats accountable once they are elected. Consequently, the outlook for blacks in the United States regarding housing, jobs, education, and criminal justice is little better today than when Kennedy helped get King out of jail in 1960. During this election year, they will again weigh what they won and what they lost when they cast their lot with the Democratic Party.