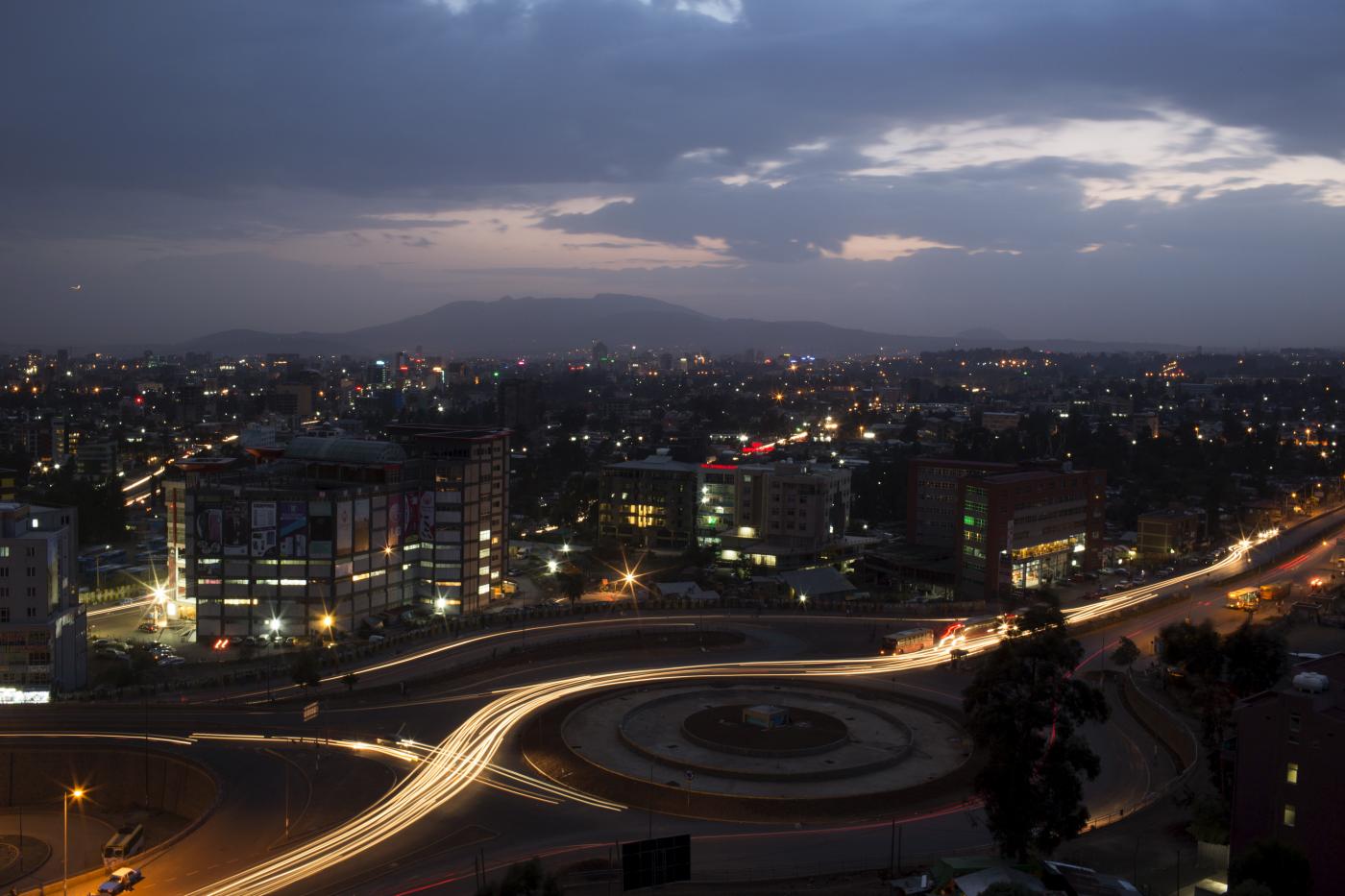 This week, Ethiopia is commemorating its national day with an exhibition celebrating the country’s economic progress. More than 140 companies—some state-owned, some private—have set up displays in Millennium Hall, a conference center in Addis Ababa’s upscale Bole neighborhood. From a scale model of the massive Grand Ethiopian Renaissance Dam, which is still under construction, to displays of domestically assembled automobiles, the exhibition aims to show visitors just how much Ethiopia has changed since troops of the ruling Ethiopian People’s Revolutionary Democratic Front (EPRDF) overthrew the communist Derg regime 25 years ago, after a long and violent civil war.

The EPRDF’s history as a revolutionary movement still shapes its approach to economic development.

Since it first took power in May 1991, the EPRDF has gone through several transformations—from a socialist liberation movement to a reluctant liberalizer to a self-styled “developmental regime” in the image of the East Asian tiger economies. But the legacies of the war against the Derg still loom large in the attitudes and policies of Ethiopia’s ruling party, which has used the organizational strategies it developed as an insurgency in the 1970s and 1980s to turn the Ethiopian economy into a regional success. A quarter century after the EPRDF swept to power, its history as a revolutionary movement still shapes its approach to economic development.

The EPRDF started as an ethnic left-wing insurgency that fought a 17-year guerilla war in Ethiopia’s arid, mountainous north before overrunning the rest of the country in a few weeks in the spring of 1991. In a region packed with armed groups, the movement stood out for its focus on institution building. The EPRDF developed a basic public health-care system and an integrated grain market in the areas it controlled, and toward the end of the insurgency, it even established a business school at the movement’s headquarters in Hagere Selam, where fighters studied microeconomics from American textbooks bound in goatskin. Its leaders had an intellectual bent, putting considerable resources into translating the works of Lenin and writing studies on Enver Hoxha’s Albania and South Korean industrial policy. When EPRDF troops captured Addis Ababa in May 1991, the self-taught economists they brought with them took over the city’s economic and financial institutions.

The EPRDF’s founders were drawn from Ethiopia’s student movement. Lacking foreign backers, their success depended on the support of the peasantry, which they mobilized by establishing administrative councils, militias, and other mass organizations. The combination of a population in arms and a small, disciplined, and occasionally ruthless political elite eventually wore out the Derg, which was the largest recipient of Soviet military aid south of the Sahara until the late 1980s.

Today, the EPRDF faces a different adversary: the economic backwardness that still stifles Ethiopia. Despite more than a decade of rapid growth, the country’s per capita GDP, which was just over $600 in 2015, is less than half of neighboring Kenya’s. In light manufacturing industries such as the textile and leather sectors, the productivity of Ethiopian workers is dwarfed by that of their counterparts in Cambodia and Vietnam. And the devastating drought that has gripped the country since mid-2015 is a reminder that even basic food security remains tenuous for millions of Ethiopians. Sekutere Getachew, the former head of external relations in the EPRDF secretariat, once told me that Ethiopia’s poverty has always been the party’s chief enemy and that overthrowing the Derg was just one step on the way to eliminating it. That sentiment is shared by many veterans of the civil war—so it should be no surprise that many of the qualities that characterized the EPRDF’s military struggle during the 1970s and 1980s now echo through the country’s economic policies.

At the core of the party’s strategy to mobilize the population is the idea of what the EPRDF calls a “developmental army.”

The EPRDF’s rhetoric reflects this. The government uses the Amharic term zemecha (“campaign”) to refer to its developmental initiatives—the same term the EPRDF used to describe its battles against the Derg, with the same military connotation. And at the core of the party’s strategy to mobilize the population is the idea of what the EPRDF calls a “developmental army”: an amalgamation of socialist party cells, productivity techniques such as the Japanese management strategy kaizen, and—in the words of Ethiopian Minister of Health Kesetebirhan Admasu—“the discipline of an army.” Like other governments, the EPRDF describes its efforts against poverty as a “fight.”

Today’s EPRDF no longer presents itself as a political vanguard in the Leninist sense, as the organization did during the insurgency years; it dropped most of its socialist jargon long ago. It has reinvented itself as a kind of capitalist vanguard: a disciplined and hierarchical organization that seeks to mobilize the country’s population for economic development rather than political revolution.

Ethiopia’s model farmer campaign, which the EPRDF government rolled out in the first decade of this century, is one example of this approach. Under this initiative, villages throughout the northern Tigray and Amhara regions, as well as in parts of central and southern Ethiopia, have been divided into cells. A leader practices modern farming techniques and a handful of peers are expected to follow his or her example, with the expectation that they will be able to increase their yields and diversify the crops they take to market. Model farmers tend to get preferred access to government inputs such as fertilizer and loans. They are also, mostly, members of the EPRDF. The effect is economic as much as political: the campaign promotes a transition from subsistence farming to commercial agriculture and draws a connection between financial success and political affiliation.

Or consider Ethiopia’s so-called endowment companies. Set up by the party with funds accumulated during the final years of the war, these firms are overseen by EPRDF cadres and are among the largest businesses in the country today. Ethiopia’s biggest construction company is part of the endowment group, as is its leading logistics firm. Party enterprises produced the cement for the new African Union headquarters inaugurated in Addis Ababa in 2012 and the equipment for the country’s new, state-run sugar factories. Initially established in the early 1990s to give the party a foothold in Ethiopia’s nascent private sector, the companies have become important tools in the government’s plans for industrial transformation, serving as trusted contractors for public infrastructure projects and as domestic pioneers in strategic industries such as textiles, leather production, and agricultural processing. The leaders of the endowment companies are in regular contact with the EPRDF and government officials; Tadesse Yemane, the general manager of SUR Construction, told me that he considers his endowment firm part of the party’s “developmental army.”

There ought to be ways to open up the economic and political space in Ethiopia without giving up what works.

The Ethiopian military, whose upper rungs are still dominated by veterans of the civil war, also has a role to play. The military-run Metals and Engineering Corporation (METEC), established in 2010 through the consolidation of a number of other businesses managed by the defense ministry, is expanding rapidly and now oversees some 16,000 employees who produce both military and civilian goods—everything from AK-47s, duffel bags, and light aircraft to household furniture, city buses, and solar panels. Most of METEC’s managers are seconded from the armed forces, and many of them studied at the Defense Engineering College, an institution outside of Addis Ababa that graduates around 600 engineers each year. The company is an attempt to use the Ethiopian military’s technical expertise, organizational discipline, and dedication to the EPRDF and its political mission in service of the government’s developmental agenda.

If the EPRDF has held on to the strategies it used in the struggle against the Derg, it is partly because they have worked. During the 1990s, the party managed to hold the country’s various ethnic groups together at a time when multiethnic societies in other parts of the world were descending into chaos. (Granting Eritreans the right to peacefully secede from Ethiopia in 1993 followed from the EPRDF’s plan for a federal system based on consent, but it did not prevent a bloody war between the two countries five years later.) In the years since 2000, Ethiopia has made larger strides than almost any other country in the region. Its GDP has quadrupled, the number of public universities has leaped from two to more than 30, and the average life expectancy has risen by more than a decade.

Increasingly, however, old habits remain because the Ethiopian government lacks the capacity to change them. Meles Zenawi, who led the EPRDF from the final years of the civil war until his death in 2012, was an original thinker and a bold statesman who made a convincing case for Ethiopia’s developmental vision abroad and shrewdly played the international donor community for funds. Prime Minister Hailemariam Desalegn, Meles’ successor, is not: although he oversaw a smooth transition of power after Meles’ death, he has shown little ambition to leave his own mark on the party’s agenda. Meles’ style of administration was uncompromising and centralized, but it was also agile; under Hailemariam, decisions are taken by committee, leaving little room for new ideas. As a result, the government has stayed the course it charted years ago.

This rigidity is becoming a problem. Although the government has laid the foundations for industrial growth through major investments in energy and transportation infrastructure, among other initiatives, it has made less progress than it had hoped. Since the adoption of Ethiopia’s first industrial policy in 2003, manufacturing has been outpaced by growth in other sectors, and its share of Ethiopia’s GDP has declined somewhat, from six to four percent. Although Ethiopia achieved GDP growth rates in the double digits in five of the past six years, the country missed the export goals it had set in its 2010–15 national development plan by a wide margin. The government’s latest development plan, approved last year, will provide companies in some sectors with preferential access to land and finance. In practice, however, the government has refused to take the steps, such as trimming down Ethiopia’s bureaucracy or facilitating access to foreign exchange, that would address the business community’s key concerns. In general, Addis Ababa has shown little interest in the kind of regulatory reforms that would create a more welcoming environment for the private sector; Ethiopia’s ease-of-doing-business ratings remain among the worst in the world.

This points to a larger crisis in Ethiopian politics. The EPRDF has never valued diversity of political opinion. Over the past two decades, it has repeatedly cracked down on opposition parties, putting their politicians in jail or forcing them into exile. Recently, however, things have gotten worse. The 2015 elections produced a parliament without a single opposition representative. An independent civil society no longer exists, and the government strictly curtails free expression; over the past year, security forces have violently quashed public protests against a municipal development plan in the central Oromia region. In the absence of political pluralism, Ethiopia’s internal conflicts are taking on a troublingly ethnic and religious character.

Western observers have exhorted the Ethiopian government to deepen its commitment to democratic and free-market reforms since 1991. Addis Ababa has never shown much interest in listening, and it is unlikely to start doing so now. But there ought to be ways to open up the economic and political space in Ethiopia without giving up what works—by welcoming rather than suppressing moderate opposition voices, by easing restrictions on the Ethiopian press, or by making substantive improvements to the country’s business climate. Striking such a balance will be the country’s main challenge in the years to come.