At least 1,000 have died in past week alone, and 204,000 migrants and refugees have successfully crossed since January 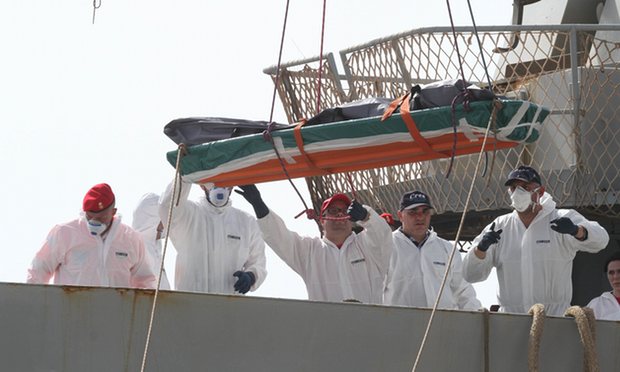 A body recovered by an Italian military ship from the Mediterranean is transferred to land at Reggio Calabria. Photograph: Adriana Sapone/AP

At least 1,000 people have died or are missing and presumed dead after a string of deadly incidents in the Mediterranean Sea over the past week, according to the International Organisation for Migration.

The updated IOM tally was drawn from accounts from survivors who were saved at sea or landed in Italy.

The UN said more than 2,500 people had died this year trying to reach Europe by sea – a sharp increase from the same period last year.

The risk of death on the central Mediterranean route between Libya and Italy was now one in 23, said William Spindler, a spokesman for the UN refugee agency (UNHCR).

The IOM said 62 people had been confirmed dead and another 971 had gone missing and were presumed dead in nine incidents on the route between Libya and Italy since 25 May.

Figures from aid groups and Italian police on Sunday counted at least 700 deaths from three shipwrecks in as many days, but the IOM pointed to other, smaller incidents as well as more precise figures following interviews with survivors.

About 204,000 migrants and refugees have crossed the Mediterranean since January, a figure that has also climbed acutely. The number is more than double the nearly 92,000 who landed on the continent’s shores during the first five months of 2015, according to the IOM. By the end of last year more than 1 million had made the trip.

Three-quarters of those who have arrived in Europe so far in 2016 landed in Greece before the end of March – most of them refugees fleeing conflicts in Syria and Afghanistan. Arrivals to Greece fell sharply after the EU entered into a deal with Turkey to stem the flow of migrants.

Meanwhile, 46,714 people have arrived in Italy since the beginning of the year, about the same number as during the first five months of 2015, the UNHCR said.

Counting all routes across the Mediterranean, Spindler said the odds of dying while trying to cross to Europe were now one in 81.

The route between Libya and Italy, which is far longer than the one between Turkey and Greece, has proven particularly deadly, with 2,119 of all deaths registered this year along that route. Nearly all of those travelling on this route are from sub-Saharan Africa, particularly Nigeria and Gambia, as well as Somalia and Eritrea.

The boats taking this route tended to be far more crowded, he explained, often carrying 600 or more passengers and sometimes being towed by larger fishing boats, which Spindler said was very dangerous.

A number of small children were reportedly among those who drowned in the boat accidents over the past week.

Associated Press and Agence France-Presse contributed to this report.