WHEN the presidential motorcade tears through the posh Borrowdale suburb where Robert Mugabe resides in Harare, all traffic still pulls onto the verge in reluctant deference to the despot. At 92 he is plainly bent on staying in power for as long as he lives. But nowadays the vendors hawking newspapers at the roadside, with Zimbabwean flags draped around their shoulders like superhero capes, are selling a different story. “Writing on the wall for Mugabe,” blares one independent newspaper’s headline. In the past few weeks a string of setbacks for the old man has increased the chances that his luck may finally be running out, even before he dies. 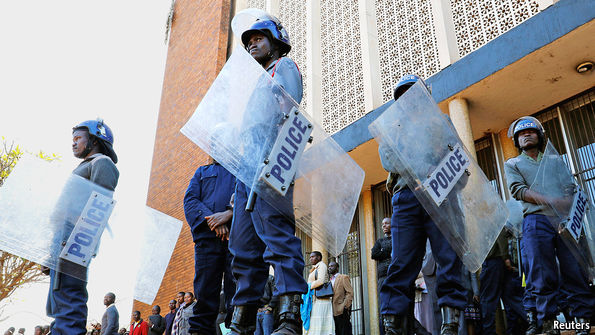 The most striking development is the sudden rise of a protest movement led by a previously unknown clergyman, Evan Mawarire, whose hashtag #ThisFlag has caught the nation’s imagination. His campaign, bolstered by the clever use of social media, has drawn support from churches and the middle class which had hitherto tended to steer clear of street politics. When Mr Mawarire, whose trademark is the Zimbabwean flag wrapped around himself, was arrested earlier this month, a large crowd, including many lawyers, converged on the court-house where he was being held, until he was freed amid triumphant cheers the next day. (More recently Mr Mawarire has found it wiser to stay in neighbouring South Africa.)

An old man in no hurry

On July 6th a general strike organised by #ThisFlag was heeded by an unusually large number of people. Many Zimbabweans, especially the legions who eke out a living by petty trading, have been infuriated by a ban on the import of basic household goods. This provoked demonstrations and the torching of a warehouse at the Beitbridge border with South Africa. Minibus drivers frustrated by the mushrooming of roadblocks where police demand bribes have also protested violently. Rarely have so many problems hit the president at the same time, says Eldred Masunungure of the Mass Public Opinion Institute in Harare. “For the regime, it should give them sleepless nights.”

Mr Mugabe was probably most shaken by the hostility of the “veterans”, (many of whom are too young to have seen action in the civil war of the 1970s). On July 21st an association of them deplored his “bankrupt leadership”. “We note with concern, shock and dismay the systematic entrenchment of dictatorial tendencies, personified by the president and his cohorts, which have slowly devoured the values of the liberation struggle,” they declared.

“It gives people confidence that Mugabe has been ditched by his erstwhile friends,” says Wilson Nharingo of the Zimbabwe Liberators’ Platform, a rival veterans’ group that has long derided those who have recently turned on Mr Mugabe as thugs for propping him up in the first place. “They have been benefiting from the system,” says Mr Nharingo. “But now they’ve been kicked off the gravy train, they’re seeing the light.”

ZANU-PF heavies have begun a witch-hunt to identify and root out those responsible for the veterans’ angry declaration. Saviour Kasukuwere, the local-government minister and a leading backer of the president’s avaricious wife, Grace, to succeed the old man, has warned disgruntled war veterans that their farms (many of which they seized from whites) would be confiscated. “There could be blood on the floor,” says Pedzisai Ruhanya, a pundit. “Mugabe is very vindictive. He will not let go.” Newspaper ads summoned all war veterans to ZANU-PF headquarters on July 27th to prove their loyalty to Mr Mugabe.

Amid these ructions the calculations of Emmerson Mnangagwa, the vice-president, who is likeliest, at least in the short run, to take over if Mr Mugabe falls or dies, have been unclear. He has previously had the tacit support of the war veterans, the army chiefs and the security service. But as the jockeying gets more feverish, new factions in every corner of the ruling establishment may emerge.

Mrs Mugabe, perhaps wary of the wind blowing in so many directions, has been away a lot in Singapore. The ZANU-PF Women’s League, which she heads, and the party’s Youth League, are both deemed doggedly loyal to the president—and presumably to herself. After the anti-government protests earlier this month thousands of youths were bussed into Harare from the countryside to march in support of Mr Mugabe and the ruling party, with loose promises that they would be given plots of land in Harare and in Bulawayo, the country’s second city.

Some opposition figures have called for a transitional authority to take over as Mr Mugabe’s authority dips. Joice Mujuru, who was vice-president until she was ejected from ZANU-PF in 2014, is hoping to lead the fray against whoever takes over her old party. But Mr Mugabe has not yet ceased to astonish his would-be successors with his resilience and cunning. “We are reaching a tipping point,” says Mr Masunungure. “But don’t underestimate the capacity of ZANU-PF to recreate itself.”