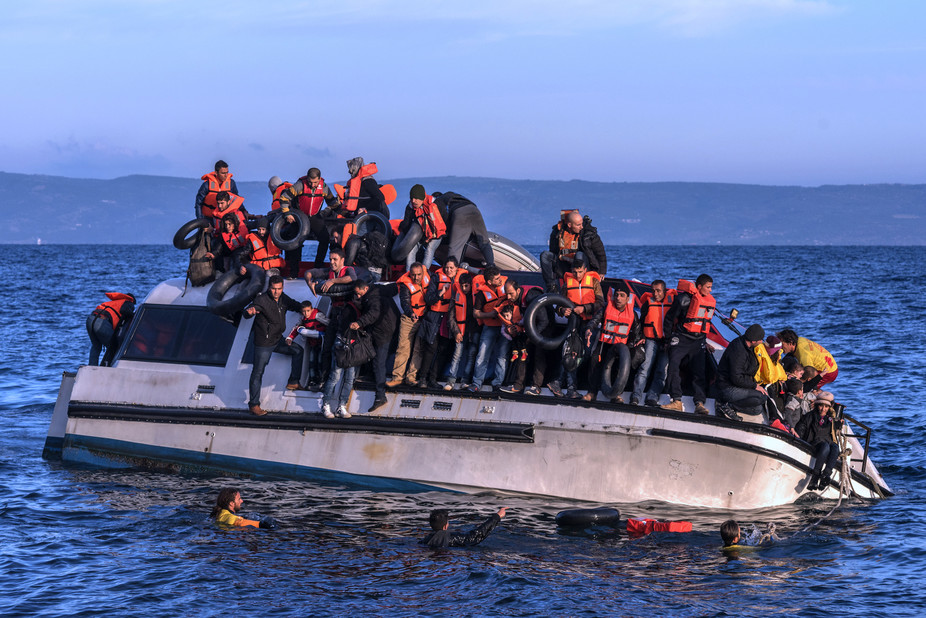 Syrian refugees rescued off the coast of Greece in 2015. Wikimedia Commons, CC BY-SA

Reports surfaced in July that a refugee living on the island of Bute off the West coast of Scotland had described her new home as “where people come to die”. Although it is early days for the UK’s Syrian Vulnerable Person Resettlement Scheme, these initial signs of alienation are troubling.

The two Syrian families quoted in the Daily Mail, who are reportedly struggling in Bute, hardly represent most refugees in the UK. Aside from the fact that the quote may have been lost in translation, Argyll and Bute council stressed that many families have settled in well.

Still, despite the welcome received by Syrians across the country, is simply sending refugees to the first areas that accept them the best long-term strategy?

We have been here before. In 1979, Margaret Thatcher grudgingly agreed that the UK would accept 10,000 Vietnamese refugees following global media attention about their plight. Last summer, equally traumatic images of Syrians escaping their war-torn homeland on rickety crafts prompted David Cameron’s pledge to resettle 20,000 people by 2020.

When it came to resettling Vietnamese refugees in the UK, Whitehall wanted to prevent ghettoes from emerging, and believed that dispersal offered the best chance of integration. But the decision to settle refugees in clusters of ten to 15 families across the UK created a postcode lottery. Families lucky enough to find themselves placed in towns and cities with high immigrant populations and low unemployment could benefit from existing support and opportunities. Those moved to far-flung locations struggled.

For example, 15 Vietnamese families were settled in Craigavon, Northern Ireland, and welcomed by the local community. A group called Craigavon Area Council for Aid to Refugees (CACAR) was established to help settle the newly arrived Vietnamese. Ka Fue Lay, a refugee who arrived in Craigavon in September 1979, when interviewed in 2014, remembered “getting a lot of help from the wonderful local people”.

Good news stories suggested that resettlement in Northern Ireland had been successful. By Christmas 1979, the Belfast News Letter declared that Vietnamese families in the province had “found home”. A civil servant also wrote that refugees were “settling in without too much fuss”.

In reality, problems were developing. Unemployment rates in the 1970s and 80s in Northern Ireland – troubled by political violence as well as economic uncertainty – were higher than the UK average. According to a member of CACAR, a unit tasked with teaching the Vietnamese English, established at the local secondary school in Craigavon, suffered from “a deplorable lack of co-ordination” and closed after only a year.

The boat people faced several difficulties. Most spoke no English and many suffered mental health problems caused by the traumas of war. None had previously experienced a Western workplace. According to a 1984 memo by the Foreign and Commonwealth Office, their unemployment rate remained astronomical, above 80%. Dispersal had left local authorities in a dilemma: while most needed new infrastructure to provide for refugees, the handful of families they had received was not enough to justify investment. Central government refused to provide additional funding.

A small Vietnamese community still exists in Craigavon, and these refugees have been very successful, establishing prosperous businesses. But most gradually drifted away from provincial towns to bigger cities such as London and Manchester, where they had family, friends and jobs. These problems were not unique to the UK. Canada experienced similar difficulties with its resettlement model. But other countries took a different approach. In Sweden, language and social services were centrally funded, resulting in greater equity. Refugees were also concentrated in areas of high employment.

Today’s civil servants would therefore be wise to think carefully before spreading Syrian families thinly across the country. There has been some welcome forward-thinking. Guidance issued in October 2015 warned that, before accepting refugees, local authorities must carefully consider whether they have the adequate infrastructure and support networks. The government has also been more forthcoming with money, promising full funding for 12 months and additional help in the future.

But early signs are discouraging. By May 2016, 1,602 refugees had been resettled across 71 different councils in England and Scotland, averaging just 23 in each. Only Coventry has received more than 100 refugees – most places have taken far fewer. Placed in small groups, with little prospect of developing a community of fellow refugees, we may see more of the problems that the Vietnamese faced, such as social isolation and poor employment prospects.

As happened with the Vietnamese boat people, an initial wave of sympathy towards Syrian refugees has dissipated and an undercurrent of resentment is surfacing. The Vietnamese experienced their share of hostility. For example, in 1984 an organisation called GAI North-East wrote to civil servants protesting that “there is no right to take these people into our country”. Recently, among many unfavourable online comments on the Daily Mail article, one branded refugees in Bute “ungrateful cowards”, stating that if they don’t like what they’re given, they should be packed off back to Syria. The message: shut up, accept your lot and be thankful that you’re not dead.

But it is not enough simply to offer a safe haven. Refugees must be handed the tools to succeed, which involves opportunities and long-term support. We cannot declare that refugees should integrate, while at the same time separating “us” from “them” by expecting continuous deference.

The Vietnamese dispersal programme in the UK was deemed a “social failure” a mere decade after it began because the bulk of refugees either left their resettlement area or remained unemployed. If Syrian refugees are similarly treated there should be no surprise if we see the same results.