Donald J. Trump officially lost me early on the morning of Aug. 25.

I was already irked by my party’s presidential nominee. A week before he had asked African-American voters to consider his candidacy by saying, “What the hell do you have to lose?” 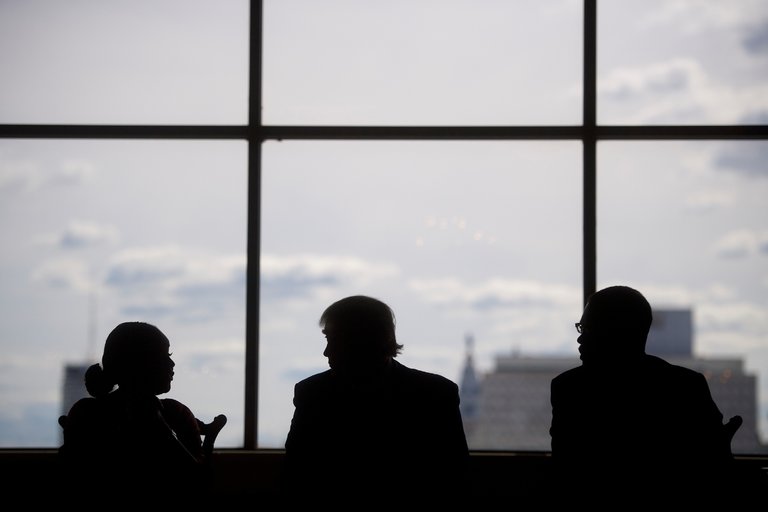 But the tweet he sent on the 25th put me over the line. Mr. Trump wrote: “So many in the African-American community are doing so badly, poverty and crime way up, employment and jobs way down: I will fix it, promise.”

On Saturday, he tried to do better. He went to Detroit’s Great Faith Ministries, a predominantly black church. It was a clichéd place for a meeting. He swayed to the music, praised black Christians and rolled out Detroit native Dr. Ben Carson for good measure. I do give Mr. Trump credit for making the trip in the first place — and acknowledging that those in the church would be his constituents whether they voted for him or not.

The problem with Mr. Trump’s efforts thus far is that he does not seem to understand that there is no such monolithic entity known as “the African-American community.” Black America includes doctors, painters, welders, farmers and even former White House staffers turned adjunct professors like me.

Mr. Trump has demonstrated not only a complete lack of empathy, but also the view that most blacks are doing badly and live in crime-infested neighborhoods.

What really angers me, however, is Mr. Trump has failed to expand the foundation of African-American outreach built by Republicans like President George W. Bush, Gov. John Kasich of Ohio, whom I worked for, and the speaker of the House, Paul Ryan, in favor of sounding cute on social media about how he can snap his fingers and solve problems that have persisted since the Great Society programs — programs that have consistently failed.

Granted, Republicans have a long road ahead of us in terms of winning black votes. President George W. Bush received 9 percent of the black vote in 2000 and 11 percent in 2004. But Mr. Trump is polling somewhere between zero and 1 percent. How has he taken the G.O.P. backward in such a short period of time?

For one, Mr. Trump has made the race all about himself and hasn’t tried to learn from the efforts of others who sought to diversify our party not by pandering on “black issues” but by engaging the black community and showing how their policies can actually serve them well.

In the 1990s, Governor Kasich, then serving in Congress, collaborated with colleagues Rick Santorum, Jack Kemp and others to design a set of legislative initiatives called the Project for American Renewal. They worked with mayors and local leaders, and the project sought to improve neighborhood blight, enhance education and revitalize communities from a local vantage point rather than a Washington-knows-best perspective.

I worked for President George W. Bush and Vice President Dick Cheney, from 2001 to 2004, and saw how they tried to make inroads in minority communities. In my first days in the White House, Mr. Cheney approached me about a project the president had been asked to support — construction of the first African-American history museum on the National Mall.

Working with a civil rights icon, Representative John Lewis, Democrat of Georgia, and leaders in the House and Senate, Mr. Bush and Mr. Cheney ushered the bill through Congress and onto the president’s desk. One of my happiest memories was standing in the corner of the Oval Office when Mr. Bush signed the bill into law on Dec. 16, 2003. The African-American Museum of History and Culture will open its doors later this month.

President Bush spoke movingly when he shared with me why he sought to eliminate the soft bigotry of low expectations, the belief that minorities couldn’t seek empowerment through education.

President Bush employed a strategy that awarded him double-digit support of blacks and over 40 percent of the Hispanic vote. He didn’t talk to black people like a monolith known as “black people.” He didn’t stereotype all blacks or Hispanics as acting or thinking in a certain way. Yes, he was criticized for his response to Hurricane Katrina, among other things, but he remained committed to increasing opportunities for all Americans. That included working with Congress to extend the Voting Rights Act in 2006.

Mr. Trump needs to realize that all blacks don’t go to church on Sunday or take their cues from the so-called civil rights leaders that purport to speak for one race. We think as individuals.

I want to be able to support Mr. Trump in November. But to earn my vote, he can’t talk about the African-American experience in this country as one of unrelenting gloom. I need to hear him speak from the heart and tell me why his experience, and policies, will best lead this country forward. There is in fact a lot to lose.