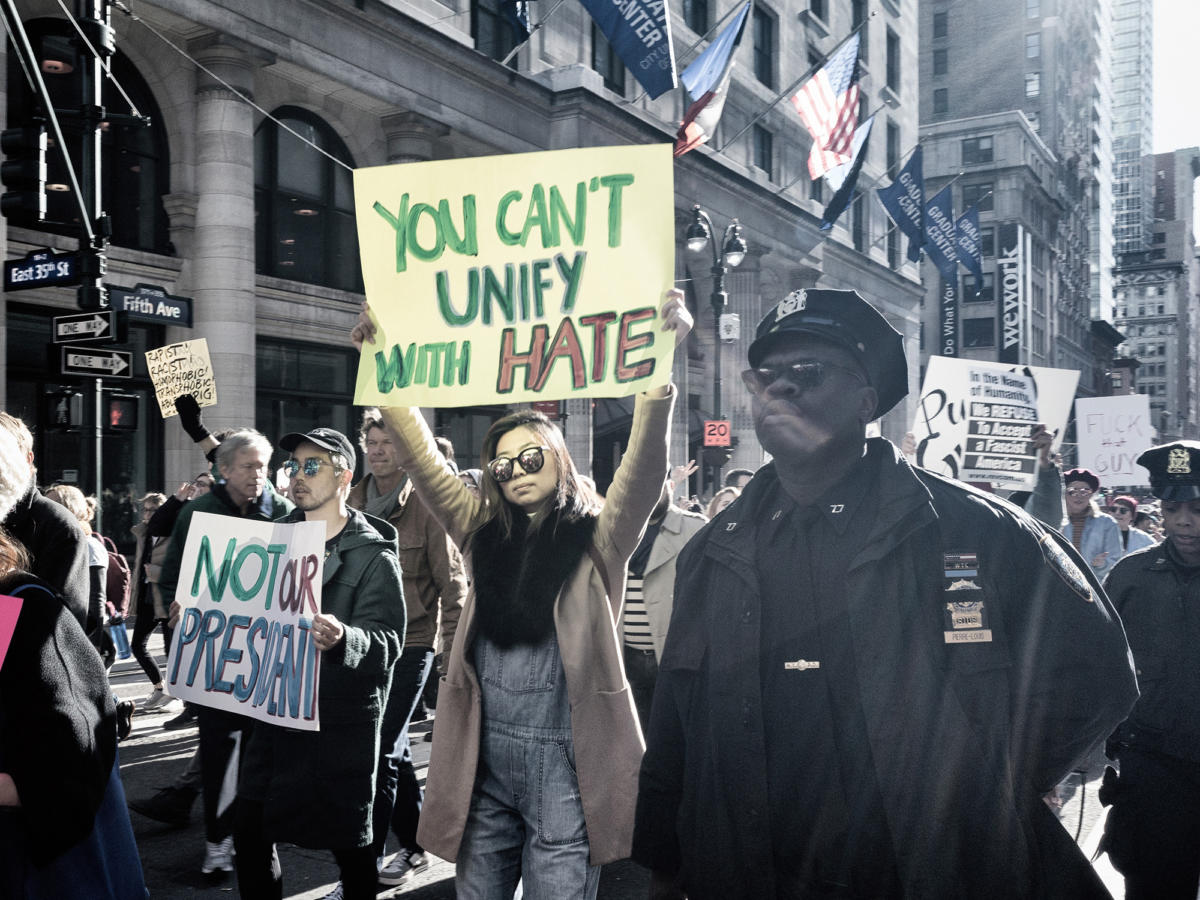 In the wake of the election, we must resist the slightest extension in the boundaries of what is right and just. PHOTOGRAPH BY LIVIO MANCINI / REDUX

America has always been aspirational to me. Even when I chafed at its hypocrisies, it somehow always seemed sure, a nation that knew what it was doing, refreshingly free of that anything-can-happen existential uncertainty so familiar to developing nations. But no longer. The election of Donald Trump has flattened the poetry in America’s founding philosophy: the country born from an idea of freedom is to be governed by an unstable, stubbornly uninformed, authoritarian demagogue. And in response to this there are people living in visceral fear, people anxiously trying to discern policy from bluster, and people kowtowing as though to a new king. Things that were recently pushed to the corners of America’s political space—overt racism, glaring misogyny, anti-intellectualism—are once again creeping to the center.

Now is the time to resist the slightest extension in the boundaries of what is right and just. Now is the time to speak up and to wear as a badge of honor the opprobrium of bigots. Now is the time to confront the weak core at the heart of America’s addiction to optimism; it allows too little room for resilience, and too much for fragility. Hazy visions of “healing” and “not becoming the hate we hate” sound dangerously like appeasement. The responsibility to forge unity belongs not to the denigrated but to the denigrators. The premise for empathy has to be equal humanity; it is an injustice to demand that the maligned identify with those who question their humanity.

America loves winners, but victory does not absolve. Victory, especially a slender one decided by a few thousand votes in a handful of states, does not guarantee respect. Nobody automatically deserves deference on ascending to the leadership of any country. American journalists know this only too well when reporting on foreign leaders—their default mode with Africans, for instance, is nearly always barely concealed disdain. President Obama endured disrespect from all quarters. By far the most egregious insult directed toward him, the racist movement tamely termed “birtherism,” was championed by Trump.

Yet, a day after the election, I heard a journalist on the radio speak of the vitriol between Obama and Trump. No, the vitriol was Trump’s. Now is the time to burn false equivalencies forever. Pretending that both sides of an issue are equal when they are not is not “balanced” journalism; it is a fairy tale—and, unlike most fairy tales, a disingenuous one.

Now is the time to refuse the blurring of memory. Each mention of “gridlock” under Obama must be wrought in truth: that “gridlock” was a deliberate and systematic refusal of the Republican Congress to work with him. Now is the time to call things what they actually are, because language can illuminate truth as much as it can obfuscate it. Now is the time to forge new words. “Alt-right” is benign. “White-supremacist right” is more accurate.

Now is the time to talk about what we are actually talking about. “Climate contrarian” obfuscates. “Climate-change denier” does not. And because climate change is scientific fact, not opinion, this matters.

Now is the time to discard that carefulness that too closely resembles a lack of conviction. The election is not a “simple racism story,” because no racism story is ever a “simple” racism story, in which grinning evil people wearing white burn crosses in yards. A racism story is complicated, but it is still a racism story, and it is worth parsing. Now is not the time to tiptoe around historical references. Recalling Nazism is not extreme; it is the astute response of those who know that history gives both context and warning.

Now is the time to recalibrate the default assumptions of American political discourse. Identity politics is not the sole preserve of minority voters. This election is a reminder that identity politics in America is a white invention: it was the basis of segregation. The denial of civil rights to black Americans had at its core the idea that a black American should not be allowed to vote because that black American was not white. The endless questioning, before the election of Obama, about America’s “readiness” for a black President was a reaction to white identity politics. Yet “identity politics” has come to be associated with minorities, and often with a patronizing undercurrent, as though to refer to nonwhite people motivated by an irrational herd instinct. White Americans have practiced identity politics since the inception of America, but it is now laid bare, impossible to evade.

Now is the time for the media, on the left and right, to educate and inform. To be nimble and alert, clear-eyed and skeptical, active rather than reactive. To make clear choices about what truly matters.

Now is the time to elevate the art of questioning. Is the only valid resentment in America that of white males? If we are to be sympathetic to the idea that economic anxieties lead to questionable decisions, does this apply to all groups? Who exactly are the élite?

Now is the time to frame the questions differently. If everything remained the same, and Hillary Clinton were a man, would she still engender an overheated, outsized hostility? Would a woman who behaved exactly like Trump be elected? Now is the time to stop suggesting that sexism was absent in the election because white women did not overwhelmingly vote for Clinton. Misogyny is not the sole preserve of men.

The case for women is not that they are inherently better or more moral. It is that they are half of humanity and should have the same opportunities—and be judged according to the same standards—as the other half. Clinton was expected to be perfect, according to contradictory standards, in an election that became a referendum on her likability.

Now is the time to ask why America is far behind many other countries (see: Rwanda) in its representation of women in politics. Now is the time to explore mainstream attitudes toward women’s ambition, to ponder to what extent the ordinary political calculations that all politicians make translate as moral failures when we see them in women. Clinton’s careful calibration was read as deviousness. But would a male politician who is carefully calibrated—Mitt Romney, for example—merely read as carefully calibrated?

Now is the time to be precise about the meanings of words. Trump saying “They let you do it” about assaulting women does not imply consent, because consent is what happens before an act.

Now is the time to remember that, in a wave of dark populism sweeping the West, there are alternative forms. Bernie Sanders’s message did not scapegoat the vulnerable. Obama rode a populist wave before his first election, one marked by a remarkable inclusiveness. Now is the time to counter lies with facts, repeatedly and unflaggingly, while also proclaiming the greater truths: of our equal humanity, of decency, of compassion. Every precious ideal must be reiterated, every obvious argument made, because an ugly idea left unchallenged begins to turn the color of normal. It does not have to be like this.