Demand for hide, used to make traditional ejiao, has raised the price and rate of slaughter of donkeys, endangering the livelihoods of those who rely on them. This trade is threatening livelihoods and communities – we need to act now 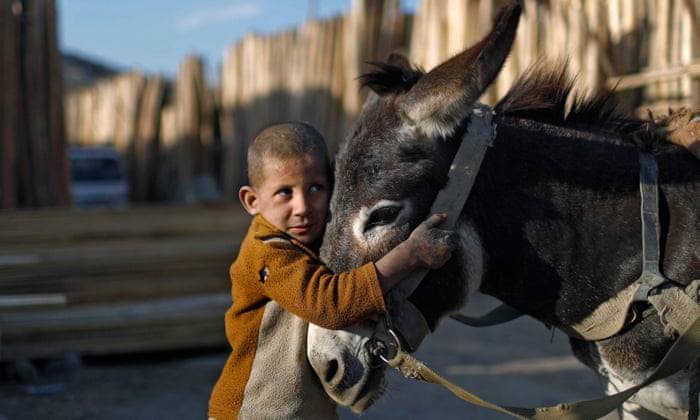 Thousands of donkeys in developing countries are being killed and their skins sold to China for use in traditional medicine, reveals a report published today by the Donkey Sanctuary.

Demand for donkey hide, which is boiled to produce gelatine – the key ingredient in a medicine called ejiao – has raised the price and the rate of slaughter of the animals, threatening the livelihoods of poor communities who rely on the them.

The emergence of the global trade in donkey hide is attributed to the rise of China’s middle class and increased perception of the medicine’s efficacy. Ejiao can sell for up to £300 per kilo.

“It’s what we refer to as a blood tonic. It’s good for building up the body and helps with what is known in Chinese medicine as ‘blood deficiency’, for conditions such as anaemia and heavy periods, as well as irritating dry coughs,” says Emma Farrant, president of the Register of Chinese Herbal Medicine. “It usually comes in blocks of dried pieces which are melted down into a decoction of herbal mixture to drink.”

However, she added: “We condemn the use of any substance that endangers any animal population, and in the UK it is illegal for herbal practitioners to prescribe animal products. Many things associated with Chinese medicine usually have alternatives. With donkey hide, for example, you could use other animal forms of gelatine such as from beef, pork or chicken. For vegetarians, seaweed could be used.”

The demand for donkey hide is outstripping supply. Around 1.8m donkey hides are traded per year, while global demand is estimated between 4 to 10m skins, states the report. This has raised the price of donkeys in some countries, making them unaffordable for many people who use them to take goods to market, cultivate land, and fetch water. The cost of a donkey in Burkina Faso, for example, has increased from £60 in 2014 to £108 in 2016.

Countries with large donkey populations also report an increase in their slaughter. Illegal or “bush” slaughter, which frequently involves stolen donkeys, has been reported in Egypt, South Africa and Tanzania, while legal, government-sanctioned slaughterhouses have been found in Kenya and Ethiopia, home to the largest donkey population in Africa.

China, where the donkey population has nearly halved since 1991 according to the report, is the major importer of donkey skin, and exports from Brazil, Mongolia, Afghanistan and several countries across Africa have been confirmed.

“Communities the world over risk being impoverished or losing their independence,” said Mike Baker, chief executive of The Donkey Sanctuary. “Donkey populations cannot continue to be decimated and communities must not be deprived of their only means of survival.” 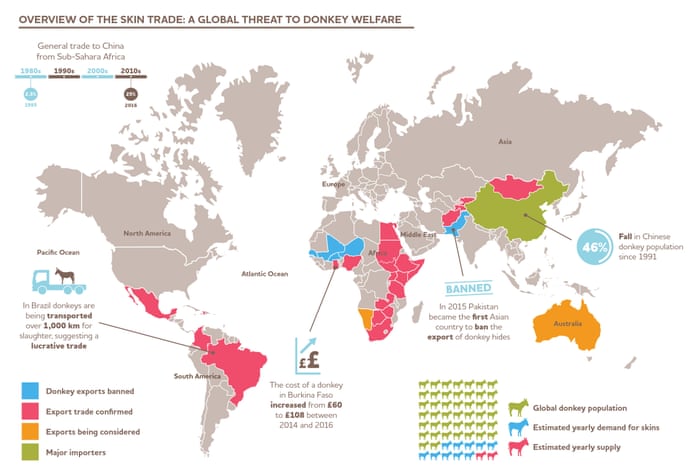 Ejiao was once the preserve of Chinese royalty. Since 2010, online and television marketing has increased the medicine’s appeal to a younger, more consumer-driven audience.

Farmers have attempted to meet the increased demand for ejiao products by farming donkeys, but this has largely been unsuccessful due to donkeys’ low fertility. Ejiao producers in China have lobbied the government to subsidise donkey breeders to supply the ejiao market and reduce the shortfall in supply. It is also thought that artificial insemination and selective breeding is being used to increase donkeys’ reproduction.

The consumption of donkey meat is a popular tradition in some parts of China, where it is highly expensive. Some groups in Africa eat donkey meat, considered an inexpensive and accessible source of animal protein, but only from the slaughter of donkeys too old or incapacitated to work. In many communities, its consumption is considered taboo.

“The ongoing use of animal products in traditional Chinese medicine (TCM) is something that genuinely no longer needs to occur,” said Philip Mansbridge, UK director of the International Fund for Animal Welfare. “Although only around 3% of TCM materia medica is made up of animal-based ingredients, and domestic and international laws have reduced demand for such products, many unscrupulous traders work to stoke demand, promoting non-essential, unlicensed and even counterfeit products and advertising false claims of the curative powers of such products.”

Five countries have banned exports of donkey hide – Pakistan, Senegal, Mali, Burkina Faso and Niger – but the Donkey Sanctuary warns that more countries need to ban the slaughter and export of donkeys for their skins.

“We are urging a halt to this trade until it can be shown to be both humane and sustainable for the donkeys and the communities that depend on them,” says Baker. “Consumers need to know the impact ejiao has on people’s lives across the world. This is not just an animal welfare issue but a humanitarian crisis and we need to take action now to stop it.”