African Union leaders chose Chad’s candidate to chair the 54-nation body on Monday at a summit where the divisive issues of Africa’s relationship to the International Criminal Court and Morocco’s readmission to the AU were on the agenda. 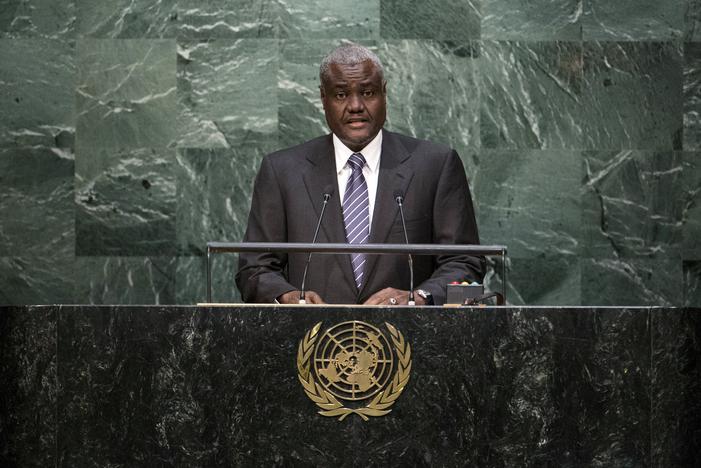 In the last round of voting, Chadian Foreign Minister Moussa Faki Mahamat beat Kenya’s top diplomat Amina Mohamed to secure the post as head of the commission of the AU, which is headquartered in the Ethiopian capital.

A Chadian official told a group of reporters that his nation’s candidate had secured 39 votes in the final round. Faki, born in 1960, has served as foreign minister since 2008. His previous posts also included a stint as prime minister.

In a race usually resolved in behind-the-scenes talks before a summit vote, three of the AU’s four major regions vied for the post – the south, the east and the largely Francophone west – with some regions pushing more than one candidate.

Outgoing commissioner, South Africa’s Nkosazana Dlamini-Zuma, stayed in post an extra six months after leaders failed to agree a candidate in July. She is now tipped as a contender to succeed her ex-husband, Jacob Zuma, as South Africa’s president.

The question of Morocco’s re-admission was also divisive, although by Monday evening, two delegates leaving the talks said it had the support of 39 nations, enough to provide a guarantee. However, reservations held by 10 AU members meant the confirmation of its new status would have to wait until Tuesday.The North African kingdom quit the AU’s predecessor, the Organisation of African Unity, three decades ago amid a dispute over the body’s recognition of Western Sahara, most of which has been controlled by Morocco since 1976.

Western Sahara’s Foreign Minister Mohamed Salem Ould Salek called progress on Morocco’s readmission a “positive step” since it would put it on equal footing with a region it has until now refused to acknowledge as anything other than its own territory.

However, King Mohammed VI has been making diplomatic efforts over the last year to try to win Rabat’s readmission.

Continental heavyweights Algeria and South Africa have been backers of the Sahrawi Republic, the domestic political movements that lays claim to the territory along the northern Sahara’s Atlantic seaboard. Neither has said explicitly it will oppose Morocco’s re-entry.

Preliminary meetings have also been dominated by disputes over the International Criminal Court (ICC), which countries such as South Africa and Kenya say is a tool of Western imperialism that unfairly targets the continent.

Conversely, Nigeria, Botswana and other states say the Hague-based court is an important legal backstop for countries whose domestic justice systems have been compromised by civil conflict.

“You have all these calls for unity but actually if you look at the AU now, it is more divided than ever – over Morocco, the regional divisions and the ICC,” said Liesl Louw-Vaudran, an AU expert at the Institute for Security Studies in Pretoria. “It’s unprecedented.”

During Dlamini-Zuma’s time in charge of the AU, the medical doctor has focused on reforming the AU’s dysfunctional internal bureaucracy and drawing up a long-term plan for improving the lives of Africa’s underprivileged citizens, especially women and children.

However, she has been criticized for failing to heal the rifts created by her election and not doing more to prevent conflict in countries such as South Sudan, which the United Nations says is tilting towards genocide.