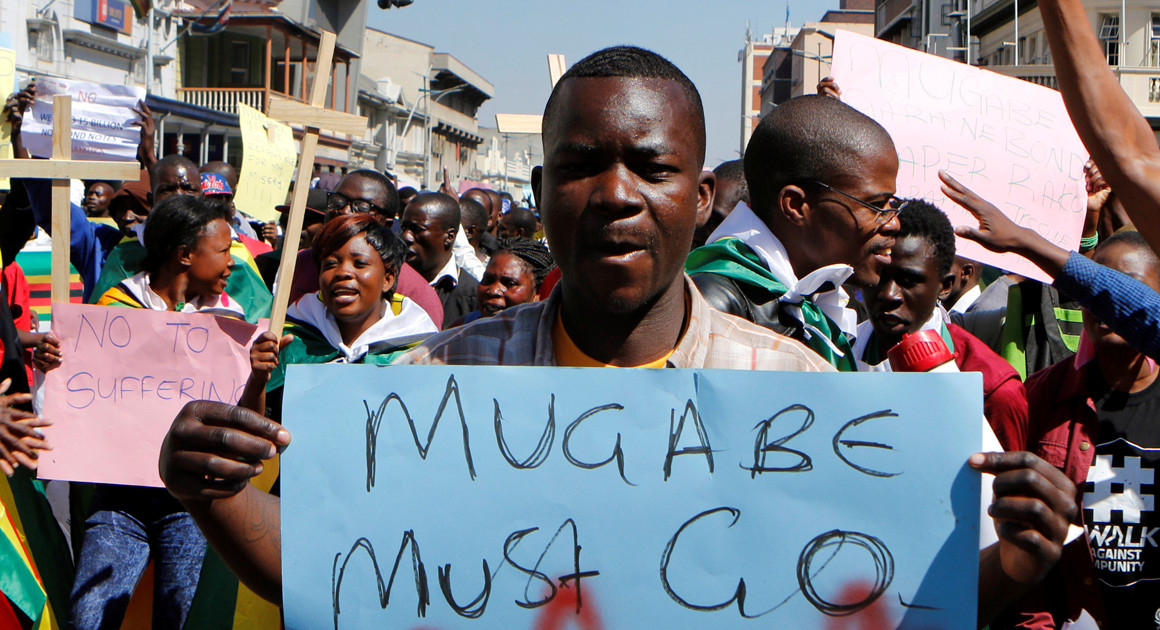 Sub-Saharan Africa is home to many of the world’s longest-ruling heads of state. Some leaders in the 1960s and 1970s sought to become “president for life,” with several postcolonial leaders managing to remain in power for three or more terms. By the turn of the twenty-first century, the trend of entrenched leadership had spread across the region, spurring corruption, instability, societal fractures, and economic stagnation. But the trend may be reversing, in part due to sustained pressure by civil society groups and regional blocs like the Economic Community of West African States (ECOWAS), which shepherded a transfer of power in Gambia in early 2017.

How prevalent is this trend?

Military coups were once a common [PDF] means of seizing power; both Mbasogo and Museveni began their presidencies this way. However, they have declined during the last two decades. There were seventy-two military coups from 1970 to 1982, but only thirty-three from 2000 to 2012.

What has been its impact on growth and stability?

Zimbabwe. Once one of the continent’s richest nations, Zimbabwe has tumbled under Mugabe to a place of chronic underdevelopment with a long-struggling economy. Mugabe’s alleged misuse of federal funds has been linked to underfunded or dysfunctional government departments and programs. In the wake of a slew of constitutional amendments granting Mugabe broad power, the country experienced drops in life expectancy and per capita income between 1990 and 2005, as well as a notable decline in its ranking [PDF] on the UN Development Program’s Human Development Index (HDI).

Democratic Republic of Congo (DRC). Under the three-decade-long dictatorship of Mobutu Sese Seko, the DRC suffered from gross corruption, embezzlement, and neglect of public infrastructure. An economy based almost exclusively on extraction of the nation’s mineral wealth deteriorated as Mobutu forced out foreign-owned companies and embezzled government funds.

Laurent Kabila overthrew Mobutu in 1997, but was assassinated in 2001; his son, Joseph, succeeded him, amassing a fortune by stealing state funds and effectively disregarding the provision of services to Congolese citizens. A war in the country’s east, considered the world’s deadliest conflict since World War II, has continued under his presidency. Security forces reportedly killed some 180 civilians following mass protests against Kabila remaining in office in late 2016.

Sudan. Omar al-Bashir came to power in 1989 after a military coup ousted the democratically elected prime minister. He has remained in office ever since despite allegations by international and domestic observers of widespread electoral irregularities and fraud. He presided over a decades-long civil war that ended with the south seceding to become the new state of South Sudan. Bashir was indicted by the International Criminal Court in 2009 on charges of war crimes and crimes against humanity for involvement in attacks on civilian groups in Darfur.

Extended terms in office have also contributed to the slowing down of democratization that the continent saw in the 1990s and early 2000s. The Economist’s 2015 Democracy Index categorizes more than twenty countries in sub-Saharan Africa as having authoritarian governments.

Rights abuses in the five countries with the longest-serving leaders—Angola, Cameroon, Equatorial Guinea, Uganda, and Zimbabwe—have included secret or arbitrary arrests and detentions, tight restrictions on freedom of expression, and policy brutality, according to monitoring groups. Human Rights Watch reported that the situation in Burundi has “deteriorated significantly since 2015,” when demonstrations broke out in protest of President Pierre Nkurunziza’s decision to run for a third term and the government’s crackdown on dissent deepened.

Why has the problem persisted?

Leaders have increasingly secured longer terms through “constitutional coups,” proposing amendments for approval by the legislature or judiciary, or in national referenda, that allow for additional terms in office. This practice gained intensity after 2000, when many postcolonial leaders were nearing the ends of their constitutional term limits.

Since then, at least seventeen heads of state have tried to remain in power by tweaking their countries’ constitutions. Namibian President Sam Nujoma did so in 1998, followed by Eyadema Gnassingbe, the president of Togo, in 2002. One year later, the Gabonese parliament voted to remove term limits from its constitution, allowing President Omar Bongo to run for a sixth term. Following these initial instances, attempts to extend terms became fairly regular occurrences, popping up every one to two years on the continent in countries including Angola, Burkina Faso, Burundi, Cameroon, Chad, Djibouti, Equatorial Guinea, Guinea, Niger, Nigeria, Republic of Congo, Rwanda, Senegal, and Uganda.

Since 2000, at least seventeen heads of state have tried to remain in power by tweaking their countries’ constitutions.

Angolan President Jose Eduardo dos Santos and former Senegalese President Abdoulaye Wade, among others, claimed they were eligible to run for additional terms after new provisions limiting presidencies to two terms were passed during their mandates; thus, they argued, the limits would only apply to future presidential terms. Burundi’s Nkurunziza made a similar claim in 2015, saying that his first term, which he won by a parliamentary vote rather than a national one, did not count toward the limit. Uganda’s Museveni paired the elimination of term limits with the introduction of multiparty politics in order to pass a constitutional amendment in 2005.

Many experts say that countries lacking effective political opposition are vulnerable to constitutional coups. Though several countries across sub-Saharan Africa tout themselves as multiparty states, some, like Cameroon and Rwanda, remain de facto one-party states. “Executives are able to act with impunity because there is no strong, organized opposition to challenge entrenched incumbents and push them toward a genuine political opening,” writes Adrienne LeBas [PDF], a professor at American University.

Kleptocratic incumbents have even more incentives to stay in office; they could lose their wealth if they were to lose power and potentially face prosecution. The network of businesses that Kabila and his family have built in and beyond the DRC has brought them hundreds of millions of dollars. Angola’s dos Santos has long been accused of funneling government funds to a small group of elites, as well as to his own family. His daughter, Isabel, is the wealthiest woman on the continent and was named head of the state oil company by her father in late 2016. However, leaders are rarely assured that they can hold on to the wealth they accumulated while in power once they step down.

“Very few African countries—in fact almost none—have any kind of pension or security scheme for former presidents or heads of state. So out of power means out of money,”Anneke Van Woudenberg Human Rights Watch’s deputy director for Africa, told Newsweek.

Mugabe has called the push for term limits a Western attempt to “place a yoke around the necks of African leaders,” and some politicians who concur with him point to Western democracies, including the United Kingdom and Canada, that have no such provisions.

When have leaders failed to extend their rule?

Zambian President Frederick Chiluba’s and Malawian President Bakili Muluzi’s proposals to extend presidential term limits in 2001 and 2003, respectively, were stopped after opposition and civil society groups formed alliances with lawmakers from the countries’ ruling parties. In 2006, Nigeria’s senate rejected an amendment put forth by President Olusegun Obasanjo that would have allowed third terms.

Roughly 75 percent of citizens surveyed in thirty-four African countries believed leaders should be limited to two terms in office.

Citizens have often opposed constitutional coup attempts through protest, at times succesfully halting proposals. In 2012, large protests in Senegal led to an electoral defeat for Wade, who was running for a disputed third term. After weeks of demonstrations in October 2014, Burkinabe citizens stopped Blaise Compaore from repealing the constitutional provision on term limits and forced his resignation. Polling by Afrobarometer found that roughly 75 percent of citizens surveyed in thirty-four African countries between 2011 and 2013 believed leaders should be limited to two terms in office.

How have regional and international actors responded?

The African Union (AU) has prevented some military coups by threatening countries with suspending their membership, sanctions, or military intervention, but has been criticized for not taking similar actions against attempts at extending presidential terms. In 2012, it ratified the African Charter on Democracy, Elections, and Governance [PDF], which calls on member states to identify illegal means of accessing power or staying in office, including refusals “to relinquish power after free, fair, and transparent elections” and constitutional amendments that infringe upon “the principles of democratic changes of power.” In January 2017, the AU stated it would not recognize Jammeh beyond his mandate.

West Africa’s bloc, ECOWAS, has also become active in some cases. A military offensive by ECOWAS troops forced Jammeh to step down and leave the country. The body also deployed observers to help ensure free and fair elections in 2015 in Nigeria, Togo, Guinea, the Ivory Coast, and Burkina Faso. ECOWAS leaders discussed a proposal to ban presidents from seeking third terms at a 2015 regional summit, but the bloc postponed a decision due to opposition from Togo and Gambia.

The United Nations and European Union have imposed sanctions on several African countries, including Burundi, the DRC, and Zimbabwe, in response to impeded political transitions or fair elections. The UN endorsed ECOWAS military action in Gambia and threatened sanctions if Jammeh refused to leave. Millions in EU development aid to Gambia had been frozen since December 2014 due to human rights concerns; following Jammeh’s departure, the bloc announced it would release the funds.

In the DRC, the Roman Catholic Church and opposition groups are advocating for a deal with Kabila to hold elections in 2017. The death of a leading opposition figure may slow progress on an agreement.

The Trump administration has not yet provided plans for Africa policy, but previous administrations cited democracy advancement as a U.S. priority on the continent. President Barack Obama said in a 2012 brief on U.S. strategy in sub-Saharan Africa that the United States would “not stand idly by when actors threaten legitimately elected governments or manipulate the fairness and integrity of democratic processes.” In an address to AU leaders three years later, Obama urged the body to ensure that heads of state comply with term limits.

“Only in combination with engagement and organized and effective domestic democratic pressure can sanctions help lead to transitions to democracy.”           —U.S. Ambassador Princeton N. Lyman

Former U.S. ambassador to Nigeria and South Africa Princeton N. Lyman argues that U.S. sanctions aimed at pressuring leaders [PDF] to leave office are often unsuccessful. “Only in combination with engagement and organized and effective domestic democratic pressure can sanctions help lead to transitions to democracy,” he said during a 2016 U.S. Senate hearing.

The United States has at times prioritized security interests over concerns about prolonged rule, choosing not to penalize long-serving leaders of partners, such as Cameroon, Chad, and Uganda. The U.S. military, whose operations are headed by the regional military command AFRICOM, has worked with these countries on training their military forces, sharing intelligence, and helping troops to combat Islamist rebel groups on the continent, including al-Shabab in Kenya and Somalia and Boko Haram in Nigeria.

George F. Ward discusses how Zimbabwe can prepare for a post-Mugabe government in a CFR Contingency Planning Memorandum.