Jim Yong Kim says there is greater risk of war, terrorism and increased migration if aspirations of poorer countries are not met 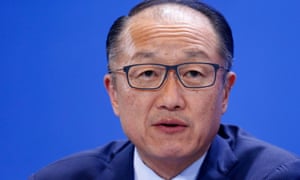 Failure to meet the internet-inspired aspirations of people in poor countries runs the risk of creating the conditions for war, terrorism and increased migration, the president of the World Bank has warned.

Speaking in London ahead of the Bank’s spring meeting next week, Jim Yong Kimsaid an urgent development push was needed in order to meet the demands for a better life by those in developing countries, increasingly aware through their smartphones of how rich people lived.

The Bank is particularly worried about recent low growth in Africa and Kim said official aid money should be used to turn the billions of dollars provided by western countries into trillions of dollars of investment from the private sector.

“Aspirations, linked to opportunity, can breed dynamism and inclusive, sustainable economic growth,” Kim said, in a speech at the London School of Economics on Tuesday. “But I worry that if there’s no opportunity to achieve these aspirations, frustration may well lead to fragility, conflict, violence and eventually migration.

“We’re already seeing worrying trends – 2 billion people live in countries affected by fragility, conflict and violence. After a period of decline since the end of the Cold War, violent conflicts have increased rapidly since 2010. Terrorism incidents have increased by 120% since 2012.”

Kim said that an individual’s happiness was linked not just to their own income but also to the incomes of others. As internet coverage had expanded, the comparison was increasingly with people in rich countries.

Kim said creating the right conditions for the private sector to invest was vital if the world was to meet the ambitious sustainable development goals by the target date of 2030.

The World Bank president believes that too much official aid has been spent on projects that the private sector could finance, and that instead of picking “low hanging fruit” official development assistance should be spent in more difficult areas.

He said the top priority should be to “systematically de-risk countries to enable private sector financing, while at the same time ensuring that these investments benefit poor countries and poor people. We should do this by crowding in the private sector whenever possible.”

Kim added that he wanted a “win-win” outcome, where the trillions of dollars earning little interest were used to fund projects such as solar power and transport infrastructure. Investors looking for more lucrative opportunities should be mobilised to help meet the “exploding aspirations” of people all over the world.

“This is a fundamental shift in our conception of who we are,” Kim said. “For too long, our first thought was how can we get the loan or the grant out of the door? But that’s often not what’s best for poor people and poor countries, and it’s not what’s best for the world. We need to have a different and difficult conversation about how we approach development finance.”

He singled out climate change as an area where urgent action was needed. He said time was running out and joint public-private action on both mitigating the impact of climate change and adapting to the changing environment was required immediately.