She sang for Haile Selassie then retreated from the world, living barefoot in a hilltop monastery, perfecting her bluesy, freewheeling sound. Kate Molleson on The Honky Tonk Nun, her documentary about Emahoy Tsegué-Maryam Guèbrou 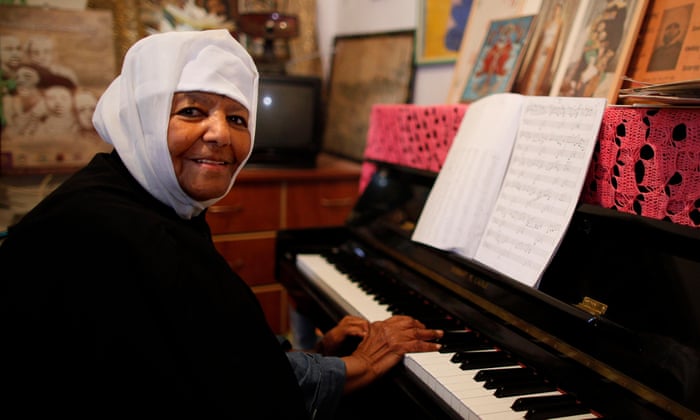 I’m no great singer, but Emahoy Tsegué-Maryam Guèbrou only really trusted me after I had sung to her. “Something from your country,” she instructed. So I found myself in the tiny bedroom of this 93-year-old Ethiopian composer-pianist-nun, croaking my way through the verses of a Robert Burns song.

Given she does not agree to most interviews, I felt I should do what I was told. The room, at the Ethiopian Orthodox church in Jerusalem, was cramped and sweltering. In it was a small bed, an upright piano draped in Ethiopian flags, stacks of reel-to-reel and cassette tapes, and a jumble of handwritten manuscripts. On the walls were portraits of Emperor Haile Selassie – Emahoy knew him in the 1930s – and her own paintings of religious icons. The door was propped open and, from the courtyard, came smells of food and the sound of monks chanting.

Emahoy is fluent in seven languages, but when I finished the Burns song (Ae Fond Kiss) she admitted the old Scots lyrics had been tricky to decipher. I gave her a potted translation – lovers meet, lovers part, lovers feel brokenhearted – and she gripped my arm and fixed me with one of her deep stares. “We can’t always choose what life brings,” she said. “But we can choose how to respond.”

If anyone is qualified to dish out such wisdom, it’s a woman whose choices were determined by religious self-exile, maverick gender struggles and Ethiopia’s dramatic 20th-century political history – and who became a singular artist in the process. 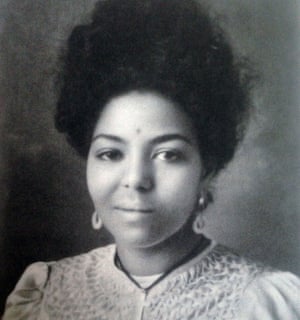 Most people familiar with Emahoy’s music come across it via her solo piano album released in 2006, as part of the Éthiopiques collection. That series put her poised, bluesy, freewheeling waltzes together with the Ethio-jazz that emerged out of Addis Ababa in the 1960s – and although she smiles fondly at the mention of fellow Éthiopiques musicians such as Mulatu Astatke and Alemayehu Eshete, she insists she’s not a jazz artist. Her training is purely western classical; her inspiration comes from the ancient modal chants of the Orthodox church. It’s a unique fusion and it sounds like nothing else.

I was in Jerusalem to make a documentary about Emahoy. Born in 1923, she grew up in one of the country’s most privileged families. She and her sister were the first girls to be sent abroad for their education – she remembers travelling by train, aged six, from the highlands of Addis to the port of Djibouti then onwards by boat to Marseille, en route to a Swiss boarding school. That’s where she first encountered western classical music. She took piano and violin lessons and turned out to be a special talent.

In the 1930s, she returned to Addis: portraits from this period show a gorgeous young woman with a wry smile and a bold fashion sense. She went to high-society parties and sang for Haile Selassie. She had a car and raced a horse and trap around the city. She was a feminist: the first woman to work for the Ethiopian civil service, the first to sing in an Ethiopian Orthodox church, the first to work as a translator for the Orthodox Patriarch in Jerusalem. “Even as a teenager I was always asking, ‘What is the difference between boys and girls?’” she told me. “We are equal!”

That life was brutally disrupted when Benito Mussolini, with an eye on a potential colony, invaded Ethiopia in 1936 and three members of Emahoy’s family were killed. She was evacuated to Europe, but she was unfazed in her determination to become a musician and eventually found her way to Cairo to study with esteemed Polish violinist Alexander Kontorowicz. She practiced for nine hours a day and remembers it as a happy time, but the Egyptian heat got to her and she was sent home to recover in the high-altitude, more temperate climate of the Ethiopian capital.

Emahoy told me all this from her bed last summer, intent on communicating the details with precision and clarity. At the end of each day’s interview, she insisted on listening to it to make sure she had articulated her thoughts in just the way she wanted. She was fierce, alert, giggly, excellent company. She quizzed my producer and me about global politics: what did we make of the policies of Hillary Clinton and Angela Merkel? (She herself quite likes Merkel; she does not like Trump.)

When we arrived at the next part of her story, something didn’t add up. After her time in Cairo, 23-year-old Emahoy set her sights on London and was offered a scholarship to the Royal Academy of Music. But for reasons that she couldn’t or wouldn’t disclose, she was refused permission to go. Whether it was a bureaucratic glitch or something closer to the lyrics of my Burns song, we will probably never know. The disappointment made her give up the classical piano and turn to God. “It was His willing,” is all she would say when I asked what had prevented her from pursuing her studies. “We can choose how to respond.”

Emahoy never rekindled her nascent career as a classical concert pianist; instead she invented her own musical language. After becoming a nun, she spent a decade living barefoot in a hilltop monastery in northern Ethiopia, and when she eventually returned to music, she wrote her own compositions, infusing the classical training of her youth with the pentatonic chants she was singing in church. There’s a stunning timelessness to her music: the ornaments are virtuosic and the chords lilt like a Chopin waltz – almost, but not quite. With Emahoy, nothing is regular. No fixed metre, no pulse that can be set in notation, no strict adherence to any one scale system. Her melodies flit between traditions; they float on their own axis.

I was lucky enough to be introduced to Emahoy by Maya Dunietz – an Israeli musician who helped Emahoy publish her work for the first time. The resulting volume contains 12 pieces, but there are dozens of other compositions yet to be published and dozens more Emahoy has yet to finish.

As well as my singing ordeal, I was put through a sight-reading test in that tiny bedroom in Jerusalem, having to prove my worth by picking my way through one of Emahoy’s latest compositions. “No pressure,” my producer whispered, helpfully. Before we left, Emahoy fixed me with that stare again. She told me to go through life fighting for equality. She said she’s working on another album. Even from her bed, she’s still choosing how to respond.