As jubilation erupts in the streets at the resignation of Zimbabwe’s president how will the downfall affect the rulers of Uganda, DRC, Rwanda and Burundi? 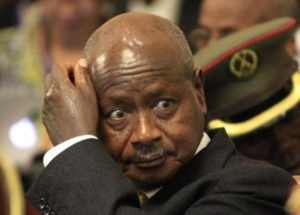 The fate of Robert Mugabe, who ran Zimbabwe with iron discipline for more than 30 years, will send a chill down the spines of other autocratic African leaders who may have out-stayed their welcome.

General Constantino Chiwenga, the armed forces chief, kicked away the military prop supporting Mugabe’s presidency last week. Mass protests in Harare, Bulawayo and other cities showed the president had lost popular support. On Tuesday, Mugabe’s party comrades began the process of impeaching him, leading finally to his long overdue resignation.
Yoweri Museveni, Uganda’s president, is one leader with reason to feel uneasy. Like Mugabe, he came to power on the back of a guerrilla struggle. Museveni has stubbornly clung to office since 1986, abolishing presidential term limits, emasculating the political opposition, and curbing media freedoms. He “won” a fifth, consecutive term last year amid widespread, credible claims of voter fraud and intimidation.

In a country of nearly 40 million people, where the average age is 15, most people were not born when Museveni first took office. At 73, he is 20 years younger than Mugabe. But his kindred liberation-era outlook, and, for example, his Mugabe-ish record of homophobia, appears anachronistic to younger generations of the Facebook age.
Speaking recently to mark 31 years in power Museveni showed disdain for modern notions of democratic accountability. According to the Zambian Observer, he told his audience: “I hear some people saying that I’m their servant. I’m not a servant of anybody. I am a freedom fighter. I am fighting for myself and for my beliefs.”
Andrew Mwenda, writing in Uganda’s Independent Magazine, said Museveni has avoided some of Mugabe’s mistakes. “Museveni has actually disbanded the old guard in the NRM [National Resistance Movement – Uganda’s Zanu-PF equivalent] and the Uganda People’s Defence Force … While the military leaders of Zimbabwe are all from the old guard who fought the bush war, Museveni has purged these people.”

Mwenda said Museveni had also sacked his most potentially troublesome challenger, Amama Mbabazi, a veteran former prime minister with similar standing to Emmerson Mnangagwa, the man who has replaced Mugabe as Zanu-PF leader.

Three other sub-Saharan African presidents with a questionable understanding of democratic pluralism – Paul Kagame in Rwanda, Pierre Nkurunziza in Burundi, and Joseph Kabila in the Democratic Republic of Congo (DRC) – may also be given pause by Mugabe’s sudden downfall.

Kagame, in charge since 1994, was elected president for another seven years in August with an amazing 98.79% of the vote – after ramming through a constitutional amendment allowing him to stand for a third term. Three of the better qualified opposition candidates were disqualified.

“Since the ruling Rwandan Patriotic Front took power 23 years ago Rwandans have faced huge, and often deadly, obstacles to participating in public life and voicing criticism of government policy,” said Muthoni Wanyeki, of Amnesty International, before the poll. The climate surrounding the elections was one of “fear and repression”.

There is little sign yet that Kagame will share Mugabe’s fate. Not so Nkurunziza in neighbouring Burundi. He played the same trick in 2015, insisting on a third term despite constitutional prohibitions. Less proficient at repression, he faced violent popular resistance – which he violently suppressed. Despite the disapproval of the African Union, EU and US, Nkurunziza remains in post. That could change, partly depending on the outcome of an International Criminal Court investigation announced this month.

Joseph Kabila, whose term as DRC president expired in 2016, is meanwhile showing Mugabe-like tenacity in clinging to office. A deal to hold the delayed elections this year appears to have collapsed, raising fears of a repeat of the lethal violence seen in Kinshasa last December.

In Africa, misrule by authoritarian leaders costs lives. The DRC’s political paralysis has distracted attention from a deepening humanitarian emergency, making it harder to help those in need. The UN warned this month that 1.4 million people in the south-west Kasai region had been displaced by violence and more than 3,000 people killed. The DRC has more displaced people than any other country in Africa. But Kabila is not budging.