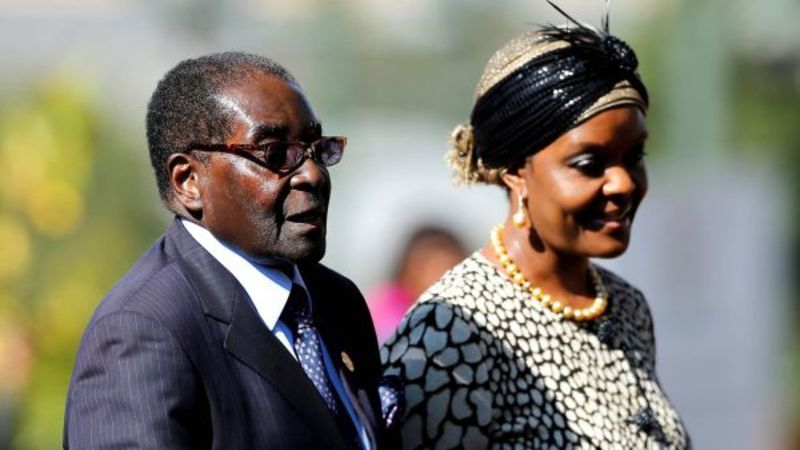 Robert Mugabe has secured his immunity from prosecution and can live safely in Zimbabwe. (Siphiwe Sibeko/AFP)

Former Zimbabwean president Robert Mugabe offered to send his wife into exile in a foreign country in order to retain power. It eventually took an army of Mugabe’s closest allies to persuade the president to leave office, even as four tanks and armed soldiers surrounded him and Grace at their private Harare residence.
On Friday tens of thousands of Zimbabweans made their way to the National Sports Stadium, where former vice-president Emmerson Mnangagwa was due to be sworn in as the interim president.

With promises of economic renewal and stability, Zimbabweans are cautiously hopeful but many international observers are wary of the prominent role the Zimbabwe Defence Forces played in what amounted to a coup over Zimbabwe’s leader of 37 years.

This week, the Mail & Guardian spoke to insiders and security people who witnessed Mugabe’s harrowing final days in power.

On Tuesday afternoon last week, armoured personnel carriers and tanks left the Inkomo barracks while Mugabe was chairing what was to be his last Cabinet meeting at Munhumutapa, one of the most protected buildings in Harare’s central business district.

By end of the day, nearly 40 army trucks, including tanks and armoured personnel carriers, were stationed at the Two Presidential Guard barracks at Dzivaresekwa, awaiting orders. Those orders, according to military sources, came and by 9.30pm, the trucks left the army camp, moving along Kirkman Road, heading towards central Harare and other key strategic areas. Meanwhile, Mugabe appeared oblivious to the developments that happened during the night.

During the roundup, ministers linked to a rival Zanu-PF faction who were on the army’s wanted list took refuge at the Blue Roof, Mugabe’s palatial mansion. These included controversial minister Jonathan Moyo.

By sunrise on Wednesday Mugabe’s chief security man, Central Intelligence Organisation director in charge of security Albert Ngulube, had been seized by the army and there was a blackout on the security situation. His motorcade also arrived at the Blue Roof but could not leave without orders from Defence House.

“Mugabe’s security was shaken to the core when his house was put under siege. He was made an ordinary man. His movements were now limited. The army was clearly in control after tanks took position at strategic places at Blue Roof,” said a senior security officer.

Between Wednesday last week and late Tuesday afternoon when he bowed to pressure, Mugabe only left his Borrowdale mansion twice. First, when he met military chiefs after the army took control of the capital and major roads and second, when he officiated at a graduation ceremony at the Zimbabwe Open University. As the drama unfolded around the Mugabes, his wife Grace, accused by many of triggering her husband’s demise, remained holed up in the mansion despite false social media reports that she had fled to Namibia or China.

She only experienced limited freedom of movement on Monday morning at 11am when her white Land Cruiser V8 was escorted by two army Mercedes sedans to her Mazowe empire, dubbed “Gracelands” by many. Sources said while Grace was away in Mazowe, another round of talks commenced at the Blue Roof. Central Intelligence Organisation boss Daniel Nhepera, Defence Minister Sydney Sekeramayi and Catholic priest Fidelis Mukonori came to the Mugabe residence. As pressure intensified, the number of high-ranking officials visiting Mugabe’s Borrowdale home increased.

On the day he tendered his resignation, Chief Secretary to the Office of the President and Cabinet Misheck Sibanda, attorney general Prince Machaya, Mukonori, Justice Minister Happyton Bonyongwe, Sekeramayi and Mugabe spokesperson George Charamba had a morning meeting with Mugabe that lasted about four hours. Justice minister Happyton Bonyongwe and Attorney General Prince Machaya are said to have made it clear to the nonagenarian that the process of impeachment, which was underway during the negotiations, would open

All this happened as Zanu-PF and the opposition MDC-T joined forces to drive an impeachment process. Earlier, his plan to convene a Cabinet meeting failed after ministers linked to Mnangagwa boycotted the meeting.

“This meeting marked the end game. He was cornered. He wanted to ensure the safety of his family and that he was guaranteed,” said another source familiar with the negotiations.
In telephonic talks with Mnangagwa, Mugabe reportedly offered to have Grace flown to a foreign country to live out her days in exile, as part of the negotiations. “ED [Mnangagwa] told him that he should look around him, that he always said he would leave when the people no longer loved him. Saturday showed him that the people no longer loved him [Mugabe],” said an insider privy to the negotiations.

Thousands of Zimbabweans marched outside his house last Saturday, singing “zvikaramba toita zve jende [if it does not work, we will use force]”. “Mugabe spent his last moments as president on November 21 before and after being pressured to resign at 1.30pm at his Borrowdale mansion in Harare, surrounded by close family friends and members of negotiating team which was engaged in talks between him and the military,” a close family member said.

“He was with Defence Minister Sydney Sekeramayi, his spokesman George Charamba, acting director general of the Central Intelligence Organisation Aaron Daniel Tonde Nhepera and close family friend, former Reserve Bank of Zimbabwe governor Gideon Gono, who was invited to join the negotiating team by Mugabe’s family on Friday November 17,” said a witness to the negotiations.
To mark the occasion, one of the attendees suggested that a picture be taken of the historic occasion. A sequence of pictures, that included Gono, Charambra, Nhepera and others were taken, but one, purportedly showing a demure Grace and dejected Mugabe, has been held up as evidence of Mugabe’s defeat. In many of the other pictures the attendees are smiling.
Zanu-PF officials have confirmed that part of the negotiated settlement is that Mugabe and his family will not face legal action and will be allowed to retain all their assets. A number of government ministers and senior officials are already being pursued in countries where they have fled, including Mozambique and Botswana.

At least 68 operatives of the much-feared Central Intelligence Organisation have been rounded up, with others having gone to ground as the military maintains roadblocks throughout the country, searching for those implicated in the decades of looting in Zimbabwe. Since his resignation, Mugabe has been relegated to a hermit and, on the few occasions he has left his home, was subjected to humiliating security checks by the military who fear he may try to aid his wife or senior government officials on the army’s wanted list.

“If it was not for Grace Mugabe, Robert Mugabe would be in power today. It is that simple. Everyone in Zanu-PF has respect for our statesman; we were willing to allow him to finish his term as first secretary and leader of the party. But to allow his wife to insult senior members of the party, insult Cabinet members …” said a top Zanu-PF insider.
A day after Mugabe’s resignation, life remained unchanged at his rural home in Zvimba but a cloud of fear hung over the villagers, with some saying they were unaware of the dramatic political developments.

For 78-year-old Felix Gatsi, who last had a job soon after independence in 1984, Mugabe’s ouster marked the dawn of a new era. “I would watch his motorcade drive to his rural home every other Sunday morning. It had been close to a month since he last came here,” said Gatsi.

“I have five children who are all unemployed and now depend on subsistence farming. Mugabe would force us to attend his rallies but he never fulfilled his election promises. For Mnangagwa, it is my desire that he won’t be another Mugabe who has caused so much suffering to the people.”