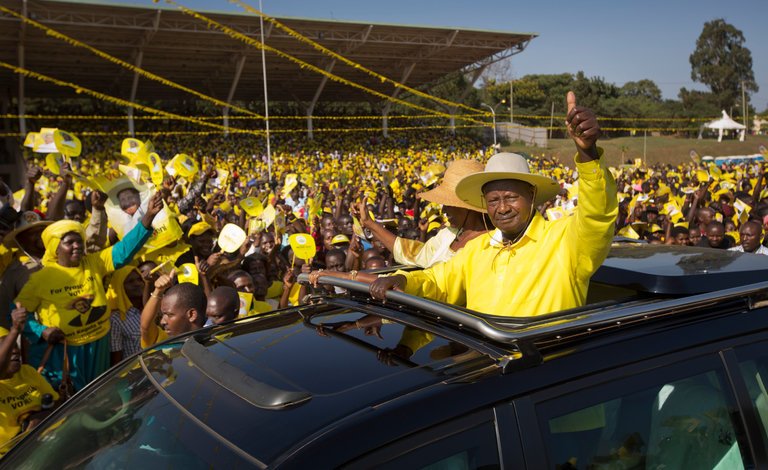 Mr. Museveni is in his fifth presidential term, which expires in 2021. By then, he will be 77 — two years past the age limit for a president set by Uganda’s 1995 Constitution.

A majority of lawmakers supported the bill, which passed 315 to 62 late Wednesday night, but a majority of Ugandans opposed it. A September poll by Afrobarometer found that 75 percent of respondents wanted to keep the age limit.

Once Mr. Museveni signs the bill, it will become law. It is expected to be challenged in court.

The final days of parliamentary debate on the bill included accusations that soldiers were hiding inside Parliament’s chapel, where some lawmakers said they uncovered dishware and bottles filled with urine, suggesting that the soldiers may have planned an extended stay.

“The process is a military coup,” said Joe Oloka-Onyango, a professor of constitutional law at Makerere University in Kampala, the capital. “It’s absolutely illegitimate and illegal. It has been surrounded by violence and intimidation.”

In late September, Betty Nambooze, a member of Parliament who opposed the bill, was attacked inside a government building by unidentified men. She spent a month in the hospital and was eventually flown to India for surgery.

One person was killed in street protests in October and two members of Parliament were hospitalized after inhaling tear gas at a rally held after the police banned “illegal” public demonstrations on the matter.

Mr. Museveni’s supporters said the bill would eliminate age discrimination in electoral politics, but critics said that argument was a red herring.
“It’s really not even about age,” Mr. Oloka-Onyango said. “It’s about accommodating Museveni’s ego and lust for power. At each instance, he has changed the goal posts that would have led to his peaceful replacement.”

In 2005, as Mr. Museveni’s second — and, by the old rules, final — term neared its end, Parliament abolished the presidential term limit. His electoral victories since then have drawn legal challenges.

“The writing was always on the wall, but unfortunately we didn’t read it closely enough,” said Jacqueline Asiimwe, a lawyer and feminist activist. “The original intent was to rule for life.”
The bill will also lower the age of eligibility for president, to 18 from 35, but young people in Uganda nevertheless vocally opposed it, and they form Uganda’s biggest constituency. Nearly 70 percent of the country’s population is under 25. A majority of them are unemployed, and they have known only one president: Mr. Museveni came to power in 1986, after his rebel group toppled an authoritarian leader.

“I’m scared for my future,” said Godiva Akullo, 27, a lawyer in Kampala who opposed the bill. “When will this country be a place that I am proud to live and work in? Will my children, if I have any, be in this same position I am in, as the child of my parents: Will they wonder what I did when this man was doing all this?”

The bill has its roots in a challenge to Mr. Museveni’s 2016 election victory. In a ruling that affirmed his victory, the Supreme Court laid out areas for electoral reform before the next campaign.
None had to do with the president’s age.

“The fundamental point is that for a long time, we’ve been talking about a review of some of the constitutional provisions that are important for ensuring we have a stronger democratic culture,” said Richard Sewakiryanga, executive director of the Uganda National NGO Forum in Kampala, a nonpartisan watchdog group. “That’s the genesis.”