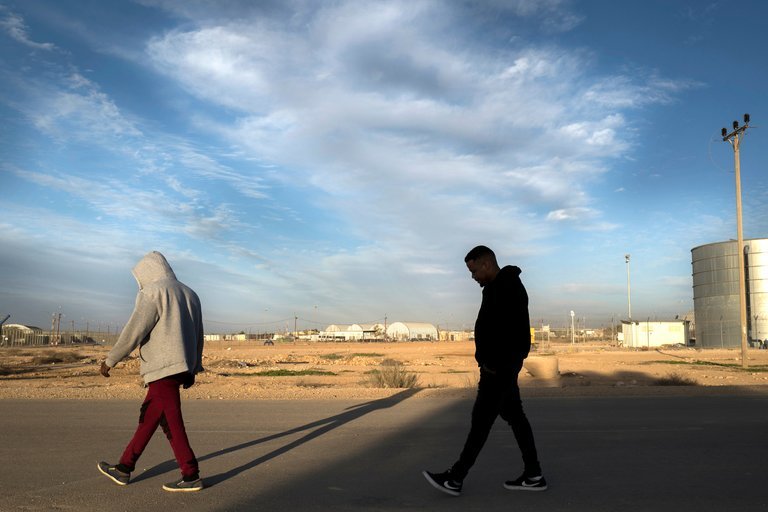 Eritrean refugees on Wednesday outside the Holot detention center near Nitzana, in the Negev Desert along Israel’s border with Egypt. Credit Jim Hollander/European Pressphoto Agency

JERUSALEM — Israel is offering a stark choice to tens of thousands of African migrants in the country: Agree to leave voluntarily by the end of March, with a plane ticket and a grant of $3,500, or face possible incarceration.

“Every country must guard its borders,” Prime Minister Benjamin Netanyahu said on Wednesday, announcing the plan. “The infiltrators have a clear choice — cooperate with us and leave voluntarily, respectably, humanely and legally, or we will have to use other tools at our disposal, which are also according to the law.”

Later, on Facebook, Mr. Netanyahu wrote, “The government approved a plan today that will give every infiltrator two options: a flight ticket out or jail.”

It is the latest phase of Israel’s long campaign to expel tens of thousands of African migrants and asylum seekers, mostly Eritrean and Sudanese, who entered the country illegally. At least 20,000 have already left Israel. “The mission now,” Mr. Netanyahu said, “is to deport the rest.”

Mr. Netanyahu said a few months ago that Israel had reached understandings with African countries willing to absorb the migrants, but without identifying the countries. Based on testimonies of people who have already left, Israeli rights groups say the main destination appears to be Rwanda.

According to a news report in Rwanda, the country’s foreign affairs minister said in November that it was in negotiations with Israel to take in African migrants who did not want to return to their countries of origin, and that up to 10,000 asylum seekers could eventually be settled in Rwanda.

The United Nations refugee agency has expressed concern over such proposals. The agency, and Israeli rights groups, say they are concerned that people who have gone to Rwanda have not found adequate safety or a durable solution to their plight, and have continued on dangerous journeys within Africa or to Europe.

“They are not being granted any status or work permits there, nor a safe haven,” said Dror Sadot, a spokeswoman for Hotline for Refugees and Migrants, an Israeli nonprofit group that collected dozens of testimonies from those who left previously for Rwanda and for other countries including Uganda, some of whom later made it to Europe.

“They keep going on their journey — many find themselves in Libya,” Ms. Sadot said, adding that many were then exposed to threats such as torture and human trafficking.

The new plan — promoted by Interior Minister Aryeh Deri, of the ultra-Orthodox Shas party, and Gilad Erdan, the public security minister, who is from Mr. Netanyahu’s conservative Likud Party — is the latest phase of a long-running political and legal struggle over the African migrants’ fate.

Critics have denounced the campaign as an effort to distract from corruption investigations against Mr. Netanyahu, and have asserted that the timing is political, given the whiff of possible early elections in the air. In the past, threats to jail the migrants en masse have not been realized, not least because of the cost and a space shortage in prisons.

About 60,000 migrants have surreptitiously crossed into Israel over the once-porous border with Egypt since 2005, most of them Sudanese or Eritreans who cannot be sent back home because of international conventions that prevent the repatriation of asylum seekers to home countries where they could face persecution.

Israeli officials insist that most of the Africans were not fleeing persecution, but came as economic migrants looking for work.

After protests by the residents of south Tel Aviv, where the new arrivals were concentrated, Israel announced in 2012 that it was stepping up efforts to deter, detain and deport the migrants. Measures including the construction of a steel barrier along Israel’s border with Egypt have since cut the flow of African migrants to almost zero. None arrived in 2017, according to the immigration authority.

A detention center, known as Holot, which was built in the desert to house up to 3,000 migrants who entered illegally, is to close down soon, after the Israeli Supreme Court placed limits on the time migrants could be held there and the authorities found it to be no longer effective in encouraging them to leave Israel.

The process of seeking asylum in Israel is a slow one. Of nearly 14,000 asylum applications submitted by Eritrean and Sudanese migrants to the Israeli authorities over the last five years, only 10 people have been granted refugee status — eight from Eritrea and two from Sudan, according to Ms. Sadot and the United Nations refugee agency.

The agency said another 200 Sudanese from Darfur had recently been granted humanitarian status in Israel. Thousands of asylum requests are pending. The Immigration Authority did not respond to a request for information.

Anwar Suleiman Arbab, 38, left the war-torn Darfur region of Sudan in 2003 and went to Libya. After five years there, he tried to make it to Europe but failed. “A friend told me Israel is a good place,” he said in an interview.

So in 2008 Mr. Arbab paid Bedouins to help him cross the border into Israel from Egypt. He was detained for five months and released, and then later detained again for 18 months in Holot. For the last two years he has been living in Herzliya, north of Tel Aviv, on a temporary visa, working in a small restaurant and studying English.

Given a choice in 2014 of leaving for Africa or being detained in Holot, he chose Holot. He had applied for asylum a year earlier, he said, and has still not received an answer.
He said that there was fear and concern among African migrants in Israel as new measures continued to be introduced, but that his answer had not changed.

“Today,” he said, “if it’s between going back to Africa or to jail in Israel, I’ll go to jail.”