The biggest problem with many African countries is that they’re led by men like Trump. 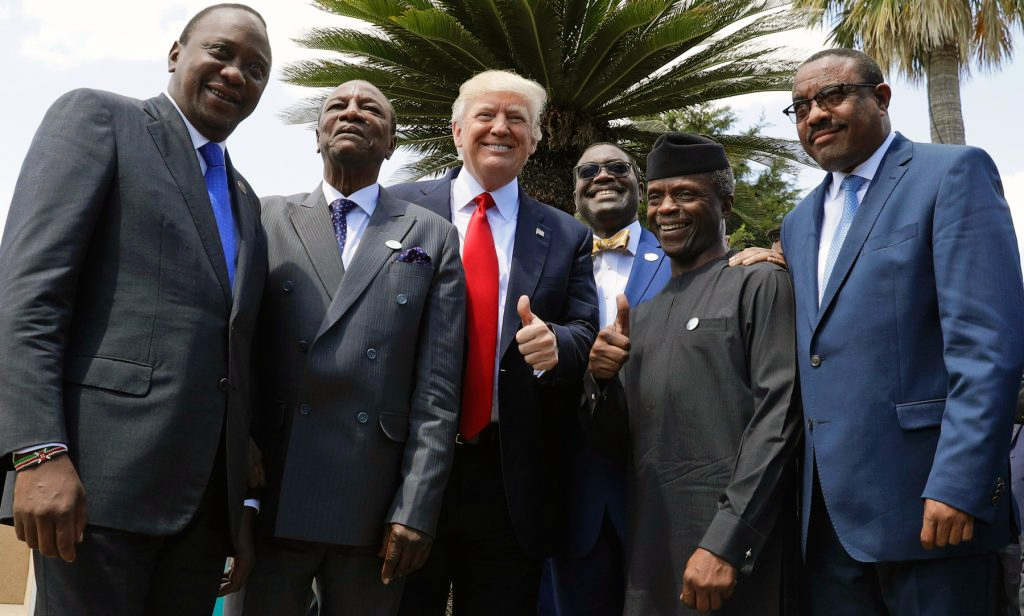 African leaders and U.S. President Donald Trump pose during the G-7 Summit on May 27, 2017 in Taormina, Sicily. (Jonathan Ernst/AFP/Getty Images)

U.S. President Donald Trump’s reported comments maligning the people of African nations were a foreseeable outburst from a man addicted to the cable news culture that consistently portrays the continent in a negative light. They were also, ironically, an indictment of his own leadership style.

What the president doesn’t grasp is that if some African nations have been reduced to “shithole countries,” it’s precisely because they’ve been run by leaders like Trump. Indeed, underdevelopment in sub-Saharan Africa — and the institutional disorders that propel migrants toward countries like the United States — can be traced directly to leaders who behave as he does.

Trump provides ample evidence that executive rot is borderless. In his first year in power, he attacked members of the federal judiciary, purged career civil servants perceived to be disloyal, and appointed unqualified members of his family and social circle to key strategic roles. USA Today detailed how dozens of lobbyists and executives with federal contracts pay large sums to play golf at Trump’s private clubs, often when he is there. He has terrorized media and political opponents. He has used his pardon power to undermine constitutional rights. His Cabinet spent months piggishly using their official positions to travel like a moneyed executive class — from which, incidentally, many came.

These moves are familiar to anyone living in the aforementioned “shitholes.” Trump wastes taxpayer money like the best of African dictatorial leadership. In his years as head of the Democratic Republic of the Congo, Mobutu Sese Seko spent $400 million on Gbadolite, a palatial spread in the heart of rural Nord-Ubangi province — complete with a landing strip for the Concorde — where he hosted monarchs, foreign heads of state, and, reportedly, Pope John Paul II. Similarly, Trump vaporized $10 million of taxpayer money on his first three gratuitous trips to Mar-a-Lago. The Washington Post estimates Trump’s four-year run rate at $130 million.

Like past leaders in some parts of Africa, Trump cocoons himself in military authority and encourages mediocrity in government. His national security advisor, defense secretary, and chief of staff — all generals — are reportedly the only people who command his attention and respect. Trump’s insistence on personal loyalty — from fired FBI Director James Comey to dog-housed Attorney General Jeff Sessions — is textbook authoritarian statecraft. Members of the executive branch who haven’t yet been sacked or indicted are deeply unqualified, or political novices, or both. The situation resembles that of Uganda, where, according to a Western diplomat observing military hero President Yoweri Museveni’s disorganized executive staff: “What counts here is patronage, not capacity…. The president has assembled around him the least talented, most clownlike advisors.”

Entrenched party and power structures in Africa enable conflicts of interest and abuses of power to demoralize those fighting for the rule of law. Kenya’s recently re-elected president, Uhuru Kenyatta, is the son of a former president. He managed to evade an indictment from the International Criminal Court by running for president. His family is also one of the largest landowners in the country, owners of a major hotel chain and a network of expensive private schools, and majority shareholders in the biggest dairy company in East Africa. His brother is the executive chair of the dairy and a commercial bank that has partnered with the leading national telecom.

The Trump Organization’s business dealings, which span the globe, also directly implicate Trump’s function as the nation’s chief executive. In the United States, the Republican Party leadership has blocked a transparent accounting of these interests. Like Kenyatta and others, Trump profits while he leads and is hoping to use the weight of his office to shield himself from the legal consequences of his actions. For assurances about divestment, Trump offers the fig leaf of his oldest two sons.

Like Kenyatta and others, Trump profits while he leads and is hoping to use the weight of his office to shield himself from the legal consequences of his actions. 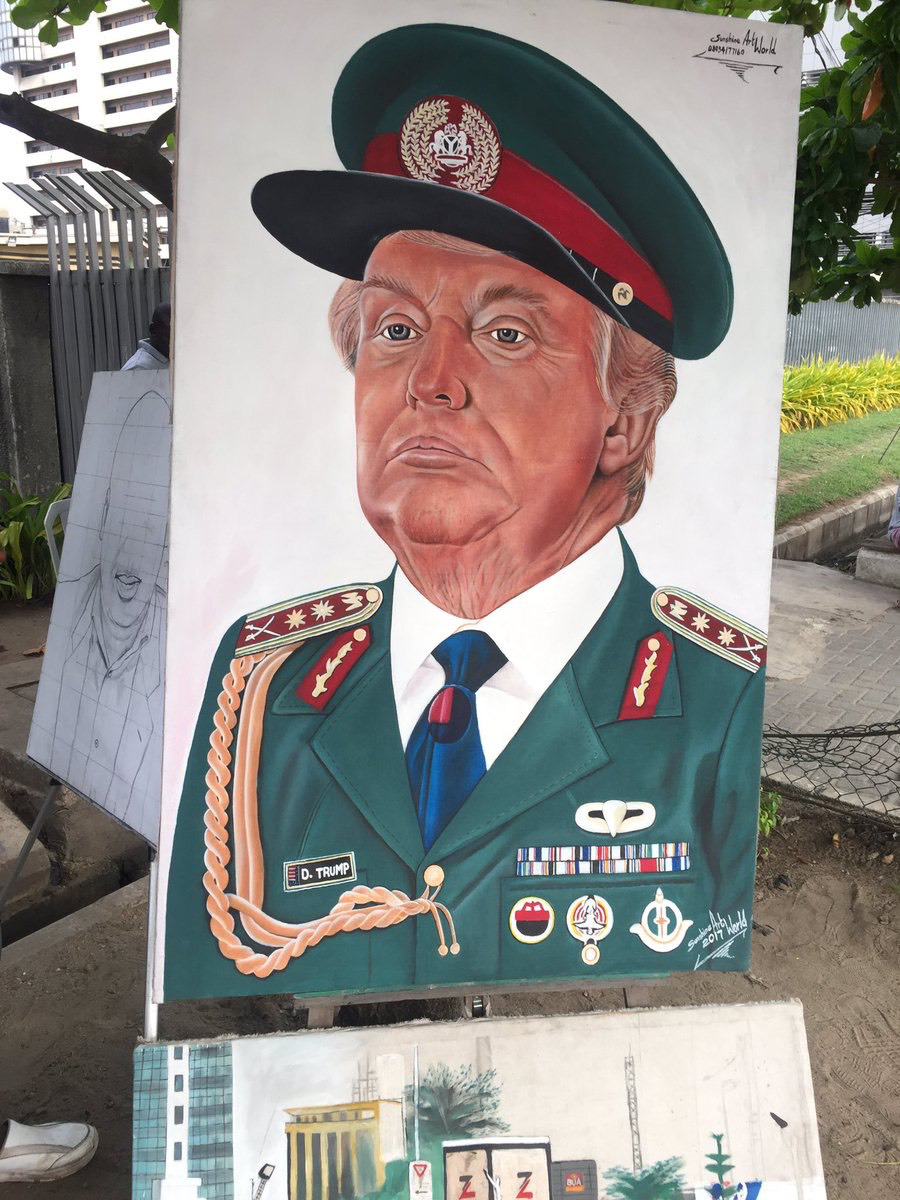 At least two Africans recognized Trump’s resemblance to African autocrats from the beginning. The South African comedian and The Daily Show host Trevor Noah aired a segment in late 2015 making fun of Trump’s African strongman traits. And in the days before his inauguration, a street artist in Nigeria painted a portrait of the president in starched military green; his hard-brimmed cap, colorful decorations, and unsmiling expression recall the “big man” styling of a generation of African autocrats. It’s a jarring comparison for Americans, who tend to assume that corruption, political capture, and other institutional vices flow only from the world’s newest postcolonial states.

Nepotism is a classic symptom in African states that can’t hold onto their best and brightest. In some cases, as in Kenya, or Liberia under Ellen Johnson Sirleaf, the relatives of those in power bypass the meritocracy to benefit from their proximity to power. Teodoro “Teodorín” Nguema Obiang Mangue is both the son of the president of Equatorial Guinea and the country’s appointed vice president — and he has amassed 115,000 Instagram followers riveted by his opulent globetrotting antics.

Under Trump, family connections have proven just as advantageous. The family of Trump’s son-in-law, Jared Kushner, hawked access to the president in a bid to bail out their highly indebted real estate holdings — tasteless behavior that has drawn scrutiny from the SEC. His daughter Ivanka Trump has been in unpaid service to the country as a special assistant to the president, but also to her corporate clothing brand, which Trump advisor Kellyanne Conway encouraged Americans to “go buy” on national cable broadcast. Her jewelry company got a boost when she wore a bracelet during an interview with 60 Minutes. Ivanka resembles no one more than Isabel Dos Santos, the former Angolan president’s daughter, who amassed huge holdings in national telecom, diamond, and oil concerns, while styling herself as an “entrepreneur.”

In several countries in Africa, ethnic, ideological, or religious affiliations can crowd out policy and expertise in civic discourse. Politicians use patronage and identity politics to both distract and unite the electorate. In 2012, Ugandan legislators ginned up a controversy on gay marriage as a momentary diversion from a corruption scandal and the issuance of lucrative oil concessions. Like the canniest African strongmen, Trump’s inflammation of the culture wars — whether it’s transgender military service or the faux war on Christmas — exploits America’s own tribal divisions for his benefit.

Ivanka resembles no one more than Isabel Dos Santos, the former Angolan president’s daughter, who amassed huge holdings in national telecom, diamond, and oil concerns, while styling herself as an “entrepreneur.”

In Cameroon, President Paul Biya shut off the internet in the Anglophone region of his country as a hedge against political organizing there. Trump’s Twitter bullying, frequent cries of “fake news,” and calls to weaken libel doctrine borrow from the same playbook. In November, outgoing South African President Jacob Zuma tried to prevent publication of a book detailing his government’s corruption. Two months later, Trump tried to do the same thing — commanding the distributors of Michael Wolff’s unflattering reportage to cease and desist from publication.

Then there is the habit of blaming past leadership for current challenges, and gleefully taking credit for circumstances outside of a president’s control. This manipulation of reality is peak “shithole.” In Zimbabwe, recently deposed President Robert Mugabe would frequently justify his disastrous decades in power by pointing to the era of repulsive white colonialism. Trump likewise casts his predecessor, Barack Obama, and his former opponent Hillary Clinton as architects of all that ails America. And, just as former Nigerian President Goodluck Jonathan took credit for the record oil prices that buoyed his federal budget (though little is left to show for it), Trump congratulated himself on the absence of major plane crashes last year as though it had been his top administrative priority.

Perhaps the most salient similarities are demographic. Africa is the region with the widest gap between the age of leadership and the median age of the population — 43 years. Like the octogenarians who have clung to power on the continent, the 71-year-old Trump is far older than the population he governs, and his attitudes and beliefs often feel dated and incoherent, especially when it comes to race and gender relations.

We must celebrate the talents, achievements and common humanity of African people, whether they live at home or in the diaspora. But we can’t disappear the continent’s dirty laundry.

The chorus of Africans and others attempting to reclaim the “shithole” brand are well-meaning, but misguided. We must celebrate the talents, achievements and common humanity of African people, whether they live at home or in the diaspora. But we can’t disappear the continent’s dirty laundry.

Whatever your beliefs about migration policy, it’s true that the postcolonial institutions that made Africans the best-educated immigrants in the West have deteriorated, and that younger Africans have suffered as a result.

I’ve watched with alarm as Trump’s administration has embraced the sort of corruption my parents left Nigeria to avoid. Africans and others who have weathered the damage from men like Trump should seize the moment to decry his racism — but also decry the dangers of this toxic and nihilistic brand of leadership.

Dayo Olopade is the author of The Bright Continent: Breaking Rules and Making Change in Modern Africa.