Across the continent, UK expertise is being deployed online to sway elections and target dissidents. 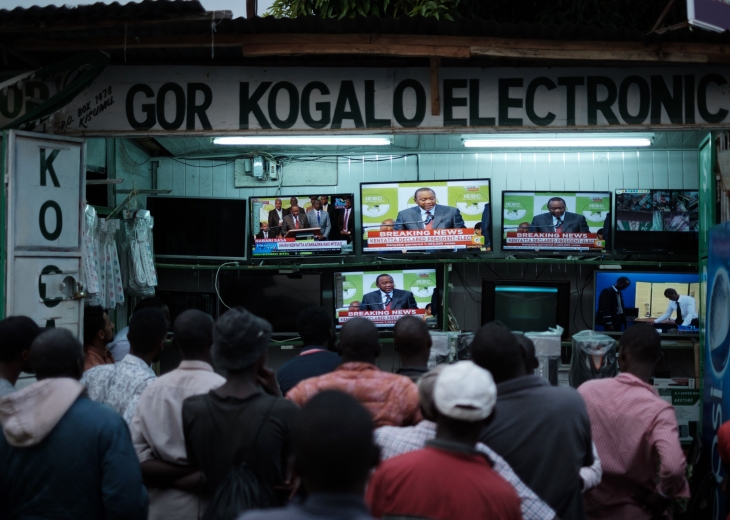 Cambridge Analytica, the British political consultancy caught up in a huge scandal over its use of Facebook data, has boasted that they ran the successful campaigns of President Uhuru Kenyatta in the 2013 and 2017 Kenyan elections. In a secretly filmed video, Mark Turnbull, a managing director for Cambridge Analytica and sister company SCL Elections, told a Channel 4 News’ undercover investigative reporting team that his firm secretly stage-managed Kenyatta’s hotly contested campaigns.

“We have rebranded the entire party twice, written the manifesto, done research, analysis, messaging. I think we wrote all the speeches and we staged the whole thing – so just about every element of this candidate,” Turnbull said of his firm’s work for Kenyatta’s party.

Cambridge Analytica boasts of manipulating voters’ deepest fears and worries. Last year’s Kenyan election was dogged by vicious online propaganda targeting opposition leader Raila Odinga, with images and films playing on people’s concerns about everything from terrorism to spiralling disease. No-one knows who produced the material. Cambridge Analytica denies involvement with these toxic videos – a claim that is hard to square with the company’s boast that they “staged the whole thing.”

In any event, Kenyatta came to power in 2013 and won a second and final term last August, defeating Odinga by 1.4 million votes.

The work of this British company is only the tip of the iceberg. Another company, the public relations firm, Bell Pottinger, has apologised for stirring up racial hostility in South Africa on behalf of former President Jacob Zuma’s alleged financiers – the Gupta family. Bell Pottinger has since gone out of business.

Some electoral manipulation has been home grown. During the 2016 South African municipal elections the African National Congress established its own media manipulations operation.

Called the “war room” it was the ANC’s own “black ops” centre. The operation ranged from producing fake posters, apparently on behalf of opposition parties, to establishing 200 fake social media “influencers”. The team launched a news site, The New South African, which claimed to be a “platform for new voices offering a different perspective of South Africa”. The propaganda branded opposition parties as vehicles for the rich and not caring for the poor.

While the ANC denied any involvement, the matter became public when the public relations consultant hired by the party went to court for the non-payment of her bill. Among the court papers was an agreement between the claimant and the ANC general manager, Ignatius Jacobs. According to the email, the war room “will require input from the GM [ANC general manager Jacobs] and Cde Nkadimeng [an ANC linked businessman] on a daily basis. The ANC must appoint a political champion who has access to approval, as this is one of the key objectives of the war room.”

Such home-grown digital dirty wars appear to be the exception, rather than the rule, in the rest of Africa. Most activities are run by foreign firms.

Ethiopia, which is now in a political ferment, has turned to an Israeli software company to attack opponents of the government. A Canadian research group, Citizens Lab, reported that Ethiopian dissidents in the US, UK, and other countries were targeted with emails containing sophisticated commercial spyware posing as Adobe Flash updates and PDF plugins.

Citizens Lab says it identified the spyware as a product known as “PC Surveillance System (PSS)”. This is a described as a “commercial spyware product offered by Cyberbit — an Israel-based cyber security company— and marketed to intelligence and law enforcement agencies.”

This is not the first time Ethiopia has been accused of turning to foreign companies for its cyber-operations. According to Human Rights Watch, this is at least the third spyware vendor that Ethiopia has used to target dissidents, journalists and activists since 2013.

Much of the early surveillance work was reportedly carried out by the Chinese telecom giant, ZTE. More recently it has turned for more advanced surveillance technology from British, German and Italian companies. “Ethiopia appears to have acquired and used United Kingdom and Germany-based Gamma International’s FinFisher and Italy-based Hacking Team’s Remote Control System,” wrote Human Rights Watch in 2014.

Britain’s international development ministry – DFID – boasts that it not only supports good governance but provides funding to back it up. In 2017 the good governance programme had £20 million at its disposal, with an aim is to “help countries as they carry out political and economic reforms.” Perhaps the government should direct some of this funding to investigate just what British companies are up to in Africa, and the wider developing world.

Martin Plaut is a fellow at the Institute of Commonwealth Studies, University of London. He is the author of Understanding Eritrea and, with Paul Holden, the author of Who Rules South Africa?