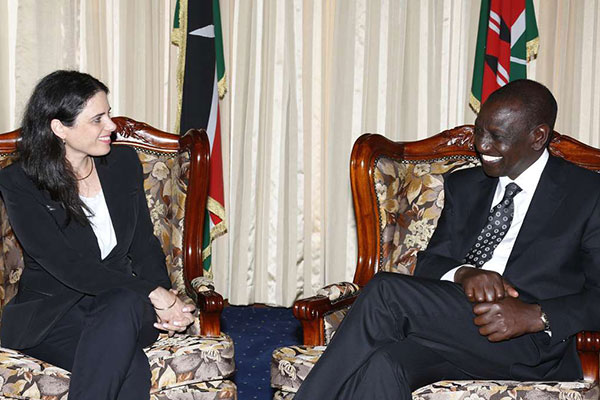 Israel’s Justice Minister AyeletShaked (L), when she met Kenya’s Deputy President William Ruto in Nairobi. Ms Shaked is among many high ranking Israeli officials to have visited the region in the past one month – visits that observers say have everything to do with deportation of African migrants. PHOTO | DPPS

Israel has abandoned a plan to forcibly deport African migrants, after failing to immediately find a willing country to take them in.
In a Supreme Court filing on Tuesday, Tel Aviv said it had dropped its months-long plans to expel thousands of mostly Eritrean and Sudanese migrants who cross into the country through Egypt’s Sinai desert.

This move is said to have been taken after Uganda, which had indicated a willingness to take in 500 of them, “took too long” in acceding to Tel Aviv’s request.
“At this stage, the possibility of carrying out an unwilling deportation to a third country is not on the agenda,” the government wrote in a response to the Supreme Court, which has been hearing the case.

Israel said that it would stop holding pre-deportation hearings for the asylum seekers, effectively nullifying any previous decisions on the matter.